It took me a little while to figure out what exactly was going on in The Endling, which doesn’t exactly start at the beginning. Why is there a man (William Moore) on the floor wearing nothing except underpants, who apparently can’t recall what his favourite colour is? Has there been a road traffic incident or a crime against the person that has caused him to be where he is? Evidently not, as his friend (Matthew Simmonds) isn’t exactly trying to get hold of the emergency services. All is explained eventually – well, sort of. The level of intrigue barely relaxes in this hour-long exploration of the extermination of species. 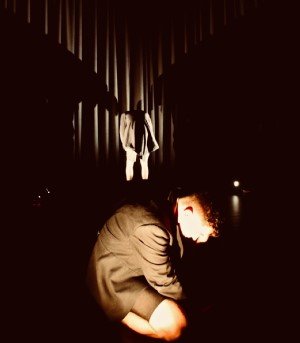 There is a smattering of lecturing, but it comes in the form of findings being presented by Robert Webster (Simmonds) and Bruce Erickson (Moore), doctors at a convalescent centre (a rehabilitation facility for older patients recovering from surgery or severe illness). A fairly gentle approach is taken when it comes to talking about endangered species becoming extinct due to human activity – the “How dare you!” platitudes are for another time and place.

Some remarkable physical dexterity is on display when the duo mimics the movements of various animals (the late Dame Gillian Lynne’s choreography in the Lloyd Webber musical Cats comes to mind). In another scene, there are some amusing descriptions of other species, and there’s some fun to be had in guessing what sort of living entity is being described, with vocabulary being limited by some sort of parallel extinction of words as the planet continues to shed species. Almost inevitably, given the subject matter, not everything is wholesome, such as the recreational game hunter who took a selfie of himself and a lion he had shot, and the practice in the Victorian era of making furniture out of exotic animals.

I don’t consider this a spoiler, as it’s ‘googleable’ information: the term ‘endling’ refers to the last known individual of a species, such that when the ‘endling’ dies, the species is extinct. What the production suggests is that there is, at present, no end of endlings. There isn’t, rightly, a definitive roadmap to reducing the current rate of species extinction – one heated discussion humorously takes a debate about what could happen in the future to its logical conclusion: if humans are the problem, would it not be expedient to get rid of humans?

There are various dramatic techniques thrown into the mix, including a song and dance number, some quickfire dialogue, and moments (yes, plural) where there is a complete lack of dialogue altogether. Direct addresses to the audience help maintain interest in this thoughtful and refreshingly non-accusatory show. Worth watching.

What if you were The Endling, the last of the human species? Strange Futures’ new show explores possible futures for the world, and all that inhabit it.

Strange Future’s new devised show, The Endling, uses physical theatre and humour to explore the interconnectedness of human existence with the lives – and deaths – of other species. The show addresses pertinent issues of environment and species extinction, but in an indirect and entertaining way that aims to get an audience on side, not blame or shame.

“A joyous journey into the end of civilisation. Brilliantly performed with moments of laughter, loss and introspection”- Arts Officer, Severn Arts

This show is not without clichés - there are three of note in this production. Firstly, the French horn of the show’s title is personified, speaking … END_OF_DOCUMENT_TOKEN_TO_BE_REPLACED

There’s very little in the way of set in this show: aside from chairs, a few crash barriers and at one point, a red carpet, the actors’ movements … END_OF_DOCUMENT_TOKEN_TO_BE_REPLACED

South African born, but raised on the Isle of Man, Pierre Novellie is a true raconteur rather than just another 'stand-up' comedian. He says about his … END_OF_DOCUMENT_TOKEN_TO_BE_REPLACED

This show, Willy Hudson began by saying, is about himself. It is written by himself, is directed by himself and executive produced by himself. Almost … END_OF_DOCUMENT_TOKEN_TO_BE_REPLACED

The rough and tumble of secondary school life is not a time I recall with fondness by any stretch of the imagination – at the time, if anyone said, in … END_OF_DOCUMENT_TOKEN_TO_BE_REPLACED