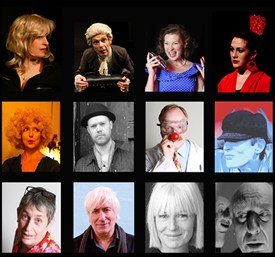 The “Face to Face Festival” has been going since 2012 and is renowned for featuring the very best in solo theatre. In 2015, the festival has moved to the White Bear Theatre and this year, as well as new writing, it features some of the best from the previous festivals and work that has come together during the “Face to Face” workshops. Last night was the launch of the 2015 festival and, in traditional style, comprised of a series of short extracts from some of the well over 35 pieces being performed over the next 14 days.

I have to say that as far as appetite whetting goes, I was highly impressed with the line-up. We had three pieces from Claire Dowie, ‘H to He (I’m turning into a man)’, ‘Why is John Lennon Wearing a Skirt’ and ‘See Primark and Die!’. I have to say that all three were really intriguing, particularly the story around Peckham Primark, which finished too soon for me. I also loved the John Lennon story which introduced me to the wonderful expression ‘knicker factor’.

Along with Claire, we had pieces from Sian Webber with ‘Martha Gellhorn; Troubles Seen’, Marta Pequeno’s ‘Lola in London’ Jack Klaff and ‘Under a Foreign Sky’, Martin Stewart performing an extract from ‘Ken Campbell’s Recollection of a Furtive Nudist’ and the completely bonkers (in a good way) Marysia Trembecka’s ‘The Singing Psychic’. All very different and definitely proving that the “Face to Face” festival really does have something for everything. I particularly liked ‘Lola in London’ with its mixture of humour, pathos and almost horror as Lola described her life in the Metropolis in great detail, both the good and the bad sides of it.

So overall, it looks like “Face to Face 2015” is going to be an amazing festival once more. Along with a marvelous combination of known talent – and I really am going to single out Claire Dowie at this point – there is going to be a plethora of new talent with some wonderful pieces created during the festival workshops. Having a look through the programme, there are a couple of shows that really do stand out as being potentially fascinating already – particularly ‘Peter and the Actinoids’ with Martin Stewart performing a venture into the twilight world between science fiction and science fact. As well as this, there is ‘Betty has to go Now’ by Deirdre Strath, which I remember from the last festival – mainly because it destroyed all my illusions about cooking icon Betty Crocker. Now, if that doesn’t get your juices flowing, nothing will.

Aside from the totally awesome shows in the West End, one of the best things about the London theatre scene is the fringe and festivals such as “Face to Face” have a huge part to play not only in the vibrancy of the capital’s theatrical life but also as a hotbed for the next batch of highly talented writers and performers that will keep us audience members entertained for generations to come.

The Face to Face Festival 2015 will feature Peter Hammill’s Opera The Fall of the House of Usher; Jack Klaff’s Under a Foreign Sky; Sian Webber as Martha Gellhorn: Troubles Seen; The Singing Psychic; Lola in London; Betty has to Go Now; and Claire Dowie performing in no less than five of her solo theatre plays.

There will also be new work from Stephen Oxley and Martin Stewart and a special tribute to solo theatre legend Ken Campbell with a new work in progress production of his cult classic Recollections of a Furtive Nudist performed by Martin Stewart.
http://www.solotheatrefestival.co.uk/

It wasn’t that long ago when anyone who gave warnings about Sleeping Beauty would be dismissed as more than a little ridiculous. The concern is that … END_OF_DOCUMENT_TOKEN_TO_BE_REPLACED

Alby hates themself, but can't work out why, and that irks them, even if they don't quite realise it. In this witty, occasionally unsubtle, but … END_OF_DOCUMENT_TOKEN_TO_BE_REPLACED

I have seen some outstanding acting recently at the intimate Finborough Theatre, and this new play is no exception. The highly talented cast quickly … END_OF_DOCUMENT_TOKEN_TO_BE_REPLACED

In the pandemic (remember that?) I worked in adult social care. My role was to help older people in their own homes with daily tasks - I’d cook meals, … END_OF_DOCUMENT_TOKEN_TO_BE_REPLACED