Home » Reviews » …The F*CK Am I Doing? Presented by The COW Community | Review

Not, alas, a show about the innermost thoughts of a Government minister, The F*ck Am I Doing? is more of a song cycle involving millennials (defined by the Pew Research Center as people born from 1981 to 1996) who have reached the point in their lives where they must face the various uncertainties and imponderables of life. Some of what is sung and spoken about are, frankly, First World Problems of the highest order: there’s even a song about the clothes washing cycle going on “until I die”, which made me shake my head and wonder if these people ever considered being thankful that they will have a large range of clothes to choose from and wear until they die. 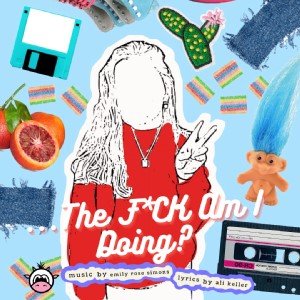 There is sufficient variation in the style and tempo of the musical numbers, and having explored almost anything and everything from the use of social media by ‘influencers’ who make a living from their online content to someone questioning if their decision to be a foreign missionary really has had a call from God, the narrative eventually turns its attention to love and relationships. There’s nothing new to report about in terms of storylines: young love can be euphoric, but young love can be painful.

The on-stage characters have names, though I’m not sure why as the only people mentioned are off-stage characters. In most cases, not enough is discovered about the characters to feel fully invested in what is going on, with the notable exception of a woman who dumps someone by telephone by way of a series of sarcastic apologies, only to then have a child with the same man. Otherwise, it’s the customer service agent who gets hit by a barrage of demands from callers, or someone trying to improve their mental wellbeing by using an app that only seems to tell them to do better at being calm and controlled, and so on.

It could, at least in its online format, be considerably pacier. Does the audience really need to watch someone texting, or at their laptop bashing out a work email? I struggled to maintain interest whilst watching someone at a bus stop on their smartphone. Granted, it was a brief moment, but nonetheless, it wasn’t exactly riveting viewing.

The characters harmonise well during the larger ensemble numbers but otherwise, there did not appear to be much, if any, connection between them, and it is therefore left to the audience to draw out common themes from the variety of scenarios presented. There is a good deal of familiarity in the portrayal of people’s morning routines before leaving the house to go to work, and the production provides some insights into the struggles that younger people contend with.

In the end, however, it feels like another show about quarter-life crises, and it was, perhaps ironically, difficult to feel much empathy with people to whom the world owes nothing. That said, I can’t fault the acting in this honest and amusing show.

I have seen some outstanding acting recently at the intimate Finborough Theatre, and this new play is no exception. The highly talented cast quickly … END_OF_DOCUMENT_TOKEN_TO_BE_REPLACED

In the pandemic (remember that?) I worked in adult social care. My role was to help older people in their own homes with daily tasks - I’d cook meals, … END_OF_DOCUMENT_TOKEN_TO_BE_REPLACED

The world-famous Wilton’s Music Hall and the children’s classic The Wind in the Willows make perfect bedfellows. Piers Torday has written a version … END_OF_DOCUMENT_TOKEN_TO_BE_REPLACED

Some journalists get, as it were, a bad press, though some of them don’t help themselves with some of the things they write and do. This play doesn’t, … END_OF_DOCUMENT_TOKEN_TO_BE_REPLACED

Paul (Lewis Bruniges) and Freddie Metz (Oliver Yellop), who identify as cousins, are so desperate to get out of the German Democratic Republic, … END_OF_DOCUMENT_TOKEN_TO_BE_REPLACED