Home » Reviews » The Feeling at the Union Theatre | Review

It’s a show that should probably come with a trigger warning, or two, or perhaps ten. A three-hour running time allows for some considerable depth and character development, and yet there are still unanswered questions, and room for a sequel. The play asks a lot of its audience, through a relatively complex set of friendships and relationships, and it’s not always immediately clear who is sleeping with whom, or not as the case may be. It’s challenging to navigate, particularly in the first half, but thankfully not impenetrable. 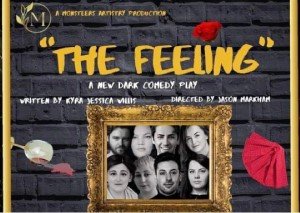 What makes the story rather gripping is, paradoxically, the lack of communication, which came across to me as an inherently British trait – a reluctance to tell it like it is for fear of hurting someone else, and in the process, hurting that someone else even more once they eventually find out ‘the truth’ one way or another. Technically, there’s not a lot of lying going on, but rather withholding of information, and there’s something Shakespearean about the audience knowing more than the characters.

Kasey (Kristian Maylor) contrasts well with his friend Archie (Sean Erwood): while Kasey is getting increasingly flustered with tech problems, which in the end turn out to be the least of his worries, Archie is almost overwhelmingly positive, striving to catch up with his friend and get to know the rest of Kasey’s ‘friendship group’ (as Kasey would have it). It is, at least partly, through Archie that the audience gets to know some of the others, although Jamie (Sharune), a doctor, being new to the group herself, more or less finds herself making her own introductions.

Kasey wants to have his cake and eat it, absurdly wanting to retain both Jessie (Kyra Jessica Willis) and Edie (Hannah Louise) as lovers, even though the ladies not only know one another but (quelle surprise) have a distinct dislike of one another. Dani (Rachel Clifford), who runs her own café, is throwing a party – though in the absence of any obvious pointers such as a ‘welcome home’ sign or a birthday cake, your reviewer is at a loss to recall what on earth it was for. The salient point, however bizarre the ‘party’ turned out to be, is that ‘everyone’ turned up, including Holt (Chris Barton), Jessie’s love interest, and Lexie (Pippa Lea), whose importance in the story grows as the play progresses.

In the second half, the pressure cooker of emotions explodes, and having long established Jessie’s drinking problems, attention turns to its far-reaching consequences. Even the chirpy Archie seethes with rage, and Dani’s firm instruction to Kasey to leave calls to mind Dame Barbara Windsor’s Peggy Mitchell in EastEnders, and her famed line, “Get outta my pub!” Hardly anybody in this collection of characters ends up particularly likeable, and despite some very heightened emotions that tip over into melodrama, it’s also remarkably realistic. There’s a police investigation that doesn’t go anywhere, and disagreements that go beyond mere misunderstandings.

Steadily paced, it is, in the end, more of a tragedy than a comedy play, though the triumphing over evil with a different kind of evil goes against the grain. Capturing the intricate nature of human friendships and relationships, the play does well to portray how and why it is not always easy to ‘just leave’, as some would invariably suggest as a viable solution. One or two plot twists couldn’t have been more clearly signposted if the show tried, although the narrative also took some unexpected turns.

A quirky sense of humour permeates proceedings, and while a little more in the way of comic relief wouldn’t go amiss in this concoction of emotions and dilemmas, there’s much food for thought in this ambitious and refreshingly full-hearted production.

This dark comedy play will have the audience crying with laughter and sadness as eight friends embark on a journey through alcoholism, co-dependency, love, lust, manipulation, lies, murder and betrayal of the worst kind. This show carries a lot of adult themes and will certainly make you think.

Harold Shipman, known to his many patients, family and friends as ‘Fred’, was Britain’s worst serial killer. The official inquiry into his crimes … END_OF_DOCUMENT_TOKEN_TO_BE_REPLACED

Being one of Arthur Miller’s best-made and most challenging plays, The Crucible is also one of his most frequently performed. I was going to say … END_OF_DOCUMENT_TOKEN_TO_BE_REPLACED

To be fair, Linda Lavin called her concert Love Notes, there’s an album of the same name, and that’s more or less what it was about - variations on … END_OF_DOCUMENT_TOKEN_TO_BE_REPLACED

Noughts & Crosses is a euphemism for blacks and whites. The Noughts are the whites and the Crosses are the blacks. In the world of the play, the … END_OF_DOCUMENT_TOKEN_TO_BE_REPLACED

This ‘juke box’ musical offers highly polished, undemanding, feel-good entertainment, showcasing, as it does, 30 songs dating from the 1960s to the … END_OF_DOCUMENT_TOKEN_TO_BE_REPLACED