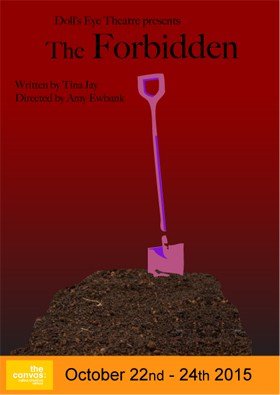 Well, it’s official. I’ll never be able to listen to the music of 5ive again without a small shudder of horror. (Although I suppose some people might feel that way about them anyway.) The innocent, carefree soundtrack to my teenage years will now forever be connected in my mind with Tina Jay’s dark and haunting four-woman play, The Forbidden.

Adapted by Doll’s Eye Theatre and directed by Amy Ewbank, The Forbidden introduces us to Steffi, Alex, Bri and Lauren, old school friends who meet by apparent coincidence after twelve years apart. Once the deliciously awkward pleasantries have been exchanged, it becomes clear there’s some unfinished business between the four women. And when the shocking truth begins to come out, it feels a bit like a story we’ve heard many times before – but not for long. This is a play that delights in wrong-footing its audience, and flips what seems to be a familiar thriller plot completely on its head, in a way that’s both refreshing and horrifying.

A short but gripping play, The Forbidden examines how the secrets of our past can come back to haunt us, in ways we never expected. As it flips back and forth in time, we see how each of the women plays a distinct role within the group: Alex (Vicki Welles), the leader, prepared to do anything, to anyone, to get her way; Lauren (Danielle Nott), who wants to be a bad girl but is held back by her cautious nature; Bri (Kirsty Osmon), clever and sensitive, who could do anything, but remains loyal to the group for her own private reasons – and Steffi (Catherine Deevy), the awkward outsider, who just wants the other girls to like her, no matter what she has to go through to earn their respect.

The play examines these relationships, and the group dynamic, which has continued into adulthood. Tina Jay’s portrayal of how teenage girls behave and interact is spot on; everyone in the audience can identify with, or at least recognise, one or more of the characters from their own school days. Vicki Welles and Catherine Deevy give stand-out performances as bully Alex and victim Steffi – while their story may seem black and white, neither character is quite as clear-cut as they appear. Danielle Nott and Kirsty Osmon are equally brilliant as Lauren and Bri, but their characters feel a little secondary to the main action, which focuses principally on the complex relationship and balance of power between Alex and Steffi.

The Forbidden is simply staged, making effective use of the limited space available in the Canvas Cafe’s cosy basement, but without distracting from the story or the performances. It’s a very inclusive atmosphere; with the lights up throughout, there’s nowhere for the audience to hide. This is a play that’s designed to shock – to make us think, and perhaps to look back on our own school days in a whole new way. And, most importantly, it shines a light on issues that are too often not talked about, or brushed aside. One thing’s for sure – I won’t be forgetting The Forbidden any time soon.

“We were special, the four of us. Did things for each other. That was what special friends did.”
Four women meet in a café, twelve years since a fateful event which changed their lives forever.
Why are they here? And what has brought them back together? The answers to these questions could tear their worlds apart.

In this premiere, written in collaboration with Doll’s Eye Theatre, Tina Jay (winner of the Kenneth Branagh Award for new writing, Windsor Fringe) explores the consequences of a dark and buried past.
When the digging begins….where will it end?

Titus Andronicus is not usually a comedy, it is usually a bloody, villainous and vengeful tale, but tonight it is a comedy and a rather amusing one at … END_OF_DOCUMENT_TOKEN_TO_BE_REPLACED

This show is not without clichés - there are three of note in this production. Firstly, the French horn of the show’s title is personified, speaking … END_OF_DOCUMENT_TOKEN_TO_BE_REPLACED

There’s very little in the way of set in this show: aside from chairs, a few crash barriers and at one point, a red carpet, the actors’ movements … END_OF_DOCUMENT_TOKEN_TO_BE_REPLACED

South African born, but raised on the Isle of Man, Pierre Novellie is a true raconteur rather than just another 'stand-up' comedian. He says about his … END_OF_DOCUMENT_TOKEN_TO_BE_REPLACED

This show, Willy Hudson began by saying, is about himself. It is written by himself, is directed by himself and executive produced by himself. Almost … END_OF_DOCUMENT_TOKEN_TO_BE_REPLACED