Home » Reviews » Review of The Hairy Ape at The Old Vic 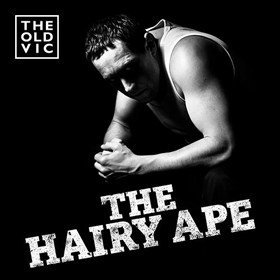 Yank stares at the large round Moon. It is the face of a man that looks down at him – an interior labourer – who shovels coal to keep his grand ocean liner afloat. Yank, then, heads to the zoo to face his inner “filthy beast” which his employer’s well-bred daughter had branded him. He scares and taunts another beast – a wary caged gorilla.

What we have here is a working class man violently rebelling against society and reflecting angrily on his social place in the world. In 1922, when script writer Eugene O’Neill completed his play The Hairy Ape, it was a turning point for capitalism and socialism. For O’Neill the economic and political situation of the 1920s was quite an opportune time to contemplate such questions about class structure, the industrial empire and authority itself. It is perhaps another reason why The Hairy Ape is regarded as a riveting and insightful piece of script writing.

The Hairy Ape is Richard Jones’ new production of O’Neill’s classic ‘super-naturalism’ play. It is the second show at the Old Vic under the artistic direction of Matthew Warchus and is a hugely ambitious work with marvellous staging and theatrical power. The isolated soliloquies, performed by award-winning actor Bertie Carvel as a confused labourer covered in soot and sweat against a pale moon and an uneasy ‘ready-to-pounce’ predator, are breathtaking, even with a cool and effortless American accent.

Jones is well known for his opera directing with numerous awards under his belt including a lifetime achievement award he received this year at the English National Opera’s (ENO) production of The Mastersingers of Nuremberg where glorious reviews flooded in. Although there is no score or orchestra at the Old Vic Jones finds ways to draw in some high-concept value that is often discovered in opera. This is helped by extraordinary choreography by Aletta Collins with nicely timed reenactments of the men by the furnace, working hard in hot, grim and extreme conditions. Mimi Jordan Sherin’s immense blood-red lights also transport the audience into the fire.

There is much to marvel with Stewart Laings’ illuminating set designs of a long rectangular yellow cage used as both the men’s engine room and the gorilla’s zoo cage. Fifth Avenue is also a light! The pervading colour is yellow in this production from stage prop to cast accessories. Watch as Yank becomes enraged by the glitterati of Fifth Avenue shoppers who have the financial backing to walk deservedly on those streets. Like a pantomime, the cast scatter onto the stage with fabric masks, repeating themselves and disregarding him.

Yet great things aside this is overshadowed by the stage’s inability to completely take a hold of the audience and keep them fully engaged. This is partly to do with O’Neill’s writing which at times can be lyrically poetic, but simply too long. In some cases, the cast spoke so fast it was hard to hear what they were saying. Nonetheless the supporting cast including Rosie Sheehy, Buffy Davis, Stefan Rhodri, Adam Burton and Callum Dixon, who also played the perplexed gorilla, are outstanding. But it is the lead character’s remarkable performance which holds the stage together. Carvel gives an astounding show of a muscular, aggressive and foul-mouthed hairy ape, something other than his recent TV acclaim as the cheating, weedy husband of Dr Foster.

Eugene O’Neill’s timeless classic of class and identity.
A classic expressionist masterpiece by Nobel prize-winner Eugene O’Neill, The Hairy Ape tells the story of Yank, a labourer who revels in his status as the strongest stoker on a transatlantic ocean liner. But when Yank is called a ‘filthy beast’ by the overbred daughter of a steel merchant, he experiences an awakening of consciousness that leads him on a journey through the wealthy neighbourhoods and disenfranchised underbelly of New York society. Searching for a way to belong, Yank is forced to confront primal questions about his true place in the world.

It wasn’t that long ago when anyone who gave warnings about Sleeping Beauty would be dismissed as more than a little ridiculous. The concern is that … END_OF_DOCUMENT_TOKEN_TO_BE_REPLACED

Alby hates themself, but can't work out why, and that irks them, even if they don't quite realise it. In this witty, occasionally unsubtle, but … END_OF_DOCUMENT_TOKEN_TO_BE_REPLACED

I have seen some outstanding acting recently at the intimate Finborough Theatre, and this new play is no exception. The highly talented cast quickly … END_OF_DOCUMENT_TOKEN_TO_BE_REPLACED

In the pandemic (remember that?) I worked in adult social care. My role was to help older people in their own homes with daily tasks - I’d cook meals, … END_OF_DOCUMENT_TOKEN_TO_BE_REPLACED