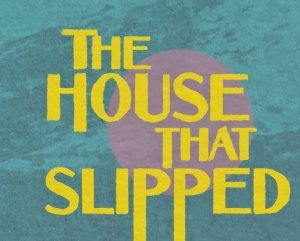 As theatre has moved online, there have been some valiant attempts to make use of technology in order to bring productions to an audience, starved of live shows. The latest in these events is The House That Slipped presented by Teatro Vivo.

Prior to the show, I received a quiz, or questionnaire to complete, Show starts with a very friendly technical run-through, which is interesting as the 2070 technology is far above ours in 2020. Soleen (Bernadette Russell) then came on and taught us our first bit of 2070 etiquette, how to say hello. Next, we were whisked off to 12 Laburnum Drive, where we got to meet the residents Kevin Baxter (Michael Wagg), his wife Sandra (Sarah Finigan), her sister Julia (Kas Darley) who is living with the Baxter’s, through no fault of her own and finally Yasmin (Tasha Magigi) from the flat upstairs. After the introductions, the group tells us what their current situation is. Whilst being on lockdown during the 2020 Coronavirus pandemic, they had somehow been transported from into 2070 where their life and the world around them is very different. At this point, things went a bit strange and the next part of the show is very personal as we were split into small groups and taken into virtual rooms with one of the family.

As an interactive event, there’s not that much I can tell you about what happens next. Everyone’s experience will be different and will depend on the dynamic of the group they are in. What I can tell you is that for me personally, Julia broke one of the cardinal rules of time travel – at least according to Doc Brown in the ‘Back to the Future’ series – and told some of us about our future lives. Not to sound too smug, but apparently, I have a lot to look forward to. Julia also gave us an insight into life in 2070. The world has changed – whether for the better or the worse is for the viewer to decide – and there is a wealth of technological advances that have made life for the citizens better, though, as you would expect, there are drawbacks to living a utopian existence.

Following our chat with Julia, we were all summoned back to meet up with Soleen. This segment of the experience was an attempt to fill in some holes in the planet’s historical record as, due to an unfortunate event around 2025, the inhabitants of 2070 had no accurate record of history. This was a really amusing part of the production as Soleen told us some historical ‘facts’ that we then helped her with.

This was followed by more face to face talking, both in small groups and as altogether and this was where we really came to the heart of this time-hopping meeting. No spoilers but it really makes everyone think long and hard about what they have heard and what the next steps would and should be.

First things first. The show itself was devised and created by the cast and directed by Mark Stevenson, and they have put together a good show that makes technology a part of the proceedings in a really impressive way. Having been on many meetings via Zoom, I’m impressed with anyone that can get the ‘breakout room’ function working, and the Teatro Vivo managed to have us flying from room to room in fine style. I was initially a bit confused about the house, as I expected a more futuristic setting. Once I realised that the entire house had slipped into 2070, the décor made more sense, though I would have expected the occupants to have bought some up to date knick-knacks from Amazon (assuming they survive to 2070) to decorate their home.

We all got to spend some time with each of the characters and have a chance to get to know a bit about their personalities. Michael Wagg’s portrayal of Kevin Baxter was first-rate. My God but that man was annoying. Personally, I would have had him strung up on one of the zip-lines that fstoon 2070 London. Sorry Kevin, but I’m not sure Julia’s way of handling her feelings towards you would be enough for me. And speaking of Julia, Kas Darley did a great job with our group in the breakout room. Obviously there is a script, but you can never tell where the public are going to go and Kas did a great job of steering us the right way whilst responding to our comments and suggestions in a very natural way. This was also true of Tasha Magigi when we spent time with her. Unfortunately, I can’t say too much about Sarah Finigan’s performance as Sandra, as this would give away a lot that you need to experience rather than read about. Suffice to say, Sarah’s performance really was mesmerising, and I had so much affection for Sandra in the end.

On the whole, The House That Slipped worked well. As with all interactive and immersive theatre, the experience really depends on the participation of the audience and the cast worked hard to ensure everyone was involved and part of the experience. I think my one criticism was the ending which, for me, felt too quick and I think would have been better with – again no spoilers – an added touch of democracy about what happens next. Given the chance, I know where my vote would have gone.

When the UK went into lockdown the residents of 12 Laburnum Drive, Brockley took the government advice very seriously.

One month on they opened their front door to find themselves in unfamiliar surroundings. Their little house had floated away and come to rest in the year 2070.

Although the future seems to be almost Utopian, they have started to think about how they could get home.

They have discovered that Zoom still works on their laptops, and by a strange setting in the latest upgrade they seem to be able to contact people from 2020.

That’s where you come in. For five nights only, a very limited audience will be enlisted to help them find their way back (if they want to), and maybe even to meet them in person a special socially distanced celebration.