I could wax lyrical about the plausibility of a scenario like that of The Interview taking place in this day and age. We’re not told exactly when the play is set, although Love Island is referenced, so (yes, I did look this up) we’re talking 2005 at the earliest. There are all sorts of ethical issues that are brought up in the interview, in which Robert Croft (Joshua David Bartholomew) persuades Jane Sinclair (Katie-Emma Silverson) to – amongst other things – share a personal story about what she believes to be her greatest achievement to date. Croft eventually offers Sinclair the job she applied for, but she has her reasons for not wanting to work at the company. But Croft won’t take no for an answer… 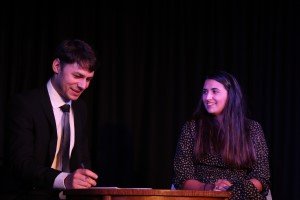 Questions of morals and professional conduct invariably arise, though in a world where there is still a disparity in pay between genders despite equal pay legislation (for instance), and where political leaders behave in ways that are far from ‘right’ or ‘honourable’, perhaps The Interview isn’t so far fetched after all. Sinclair’s answers, to be fair, are sometimes far from conventional, a point which Croft picks up on and exploits – in more ways than one.

Given the interview setting, it is, save for a few moments, a sit-down dialogue affair – not that I went in expecting cartwheels and choreography. There are, it would seem, psychological forces at work, on the parts of both interviewer and interviewee, to the point where at one point I wasn’t entirely sure who was meant to be interviewing whom. Sinclair is gregarious, which helps maintain interest, especially as Croft is relatively stiff and po-faced.

The questions come through quickly at times and are answered almost as quickly as they are asked. Where does she see herself in ten years’ time? (Yep, ten.) Who is her greatest hero? What does she consider her strengths and weaknesses to be? But it’s hardly going to be a straightforward interview on stage and nothing else. If anything, that would be too dull for an evening at the theatre. So there are unexpected twists, and not everything turns out to be what it seemed.

Silverson’s Sinclair captures both the youthful enthusiasm and vulnerability of an eager job candidate who tells it like it is and isn’t trying too hard, or at least someone who has the ability to come across that way. Bartholomew’s Croft is something of a smooth operator, maintaining a very different sort of assertiveness that toes both the company line and what he considers to be his personal reputation.

This is, essentially, a power play: to what extent can an interviewer question someone they desire to know better, ostensibly to discover whether they would be a good fit for the hiring company’s working environment? To what extent can, or should, an interviewee push back on questions considered by the interviewee to be inappropriate? Would pushing back jeopardise that person’s chances of securing the position? What relevance does one’s favourite film have to their ability to perform the functions of an office job?

Even that only scratches the surface, however, and there’s a reason why the show’s programme lists contacts for the likes of Refuge and Women’s Aid. A thoughtful production that covers more ground in less than an hour than some shows cover in more than two.

Nervous, flustered and with a tendency to overshare, Jane fumbles her way through her job interview. But as she learns more about the interviewer, can she trust that he has her best interests at heart?

The London Philharmonic Orchestra, under its chief conductor Edward Gardner, opened its 2022-23 season at the Royal Festival Hall with a thrilling … END_OF_DOCUMENT_TOKEN_TO_BE_REPLACED

The last in the Sherlock Holmes novel, The Valley of Fear, is adapted in an ambitious production - the general reaction immediately after the show … END_OF_DOCUMENT_TOKEN_TO_BE_REPLACED

The stage location of this urgent and eccentric play from the production company Fuel is nothing if not dramatic. Here we are in the riverfront … END_OF_DOCUMENT_TOKEN_TO_BE_REPLACED

The blurb for Lullaby of Scavengers didn’t really prepare me for the show, sure it mentioned that there may be some explicit content and there was … END_OF_DOCUMENT_TOKEN_TO_BE_REPLACED

There are certain chart music tunes that stick in the mind, such as ‘Bad Romance’ by Lady Gaga or ‘Bohemian Rhapsody’ by Queen. Do they count as … END_OF_DOCUMENT_TOKEN_TO_BE_REPLACED