Phil Porter’s new play, following The Boy With Two Hearts, is an adaptation of the 1951 Ealing Studios’ film of the same name which starred Alec Guinness as lowly paid bank clerk Henry Holland, who contrives to steal a van load of gold bullion and turn it into models of the Eiffel Tower with the help of Alfred Pendlebury (Stanley Holloway). The excellent programme notes state that “the Ealing view of Britain was a nation of individualists… cheerful good-natured people… that tolerated eccentrics”. 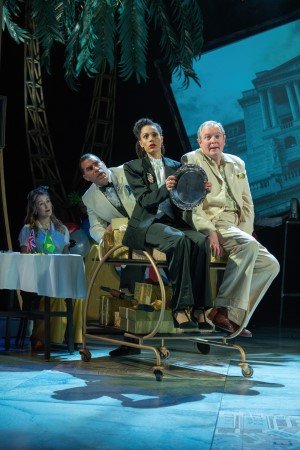 The publicity for this tour tells us that it is “the 24-carat comedy caper”: in fact, it turns out to be whimsical, mildly witty, and relaxing, amusing entertainment for a cold, wet, winter’s evening.

Apart from the two ‘stars’, Miles Jupp as Holland and Justin Edwards as Pendlebury, who do all they can to extract whatever humour there is in the script, the two actors in this ensemble cast who impress most are Victoria Blunt as Audrey and Aamira Challenger as Fernanda, both of whom have to play many roles in Holland’s retelling of his ‘caper’, all of which they do with great energy and aplomb as if their lives depended on it!

In fact, the entire cast seems to be working very hard indeed in Act One, and only allow themselves to relax in the second part, which appears to be better written – there are certainly more laughs!

Guy Burgess excels as Farrow, the Hollywood film producer (or is he?), Tessa Churchard essays a suitably larger-than-life performance as Lady Agnes, wife of the British Ambassador(John Dougall) in Rio de Janeiro, where both the play and film are set, as Holland has escaped there with his gold Eiffel Towers, living in luxury. Tim Sutton proves himself an excellent accordionist, pianist and illusionist in the role of Sammy.

Director, Jeremy Sams, clearly realised that Porter’s script needs to be played as energetically and frantically as possible and the cast respond with gusto, often trying to make lines and situations funny when in reality they aren’t!

The simple set, mostly props and small trucks set in black drapes, obviously designed for touring to many different stages, is by Francis O’Connor as are the costumes, and very effective lighting is by Mark Henderson.

It certainly makes one want to see the original film again!

Come and see one of the “greatest British films of all time” (BFI) brought to life on stage by Olivier-nominated playwright Phil Porter, directed by Tony and Olivier-nominated Jeremy Sams and starring acclaimed comic actors Miles Jupp (A Very British Scandal, Mock The Week, and Why Didn’t They Ask Evans) and Justin Edwards (The Thick of It, 1917 and The Ferryman).

This side-splittingly funny, fast-paced comedy tells the story of Henry Holland, an unassuming bank clerk who dreams of stealing the van full of gold bullion he drives across London each day. When Henry learns that his new lodger makes Eiffel Tower paperweights out of lead, he devises a plan to make his dream a reality. It’s a golden opportunity to pull off the crime of the century, they’d have to be fools to mess it up …
Come and rediscover this much-loved classic in this brand-new stage play that promises to be the most fun night out of the year!

Titus Andronicus is not usually a comedy, it is usually a bloody, villainous and vengeful tale, but tonight it is a comedy and a rather amusing one at … END_OF_DOCUMENT_TOKEN_TO_BE_REPLACED

This show is not without clichés - there are three of note in this production. Firstly, the French horn of the show’s title is personified, speaking … END_OF_DOCUMENT_TOKEN_TO_BE_REPLACED

There’s very little in the way of set in this show: aside from chairs, a few crash barriers and at one point, a red carpet, the actors’ movements … END_OF_DOCUMENT_TOKEN_TO_BE_REPLACED

South African born, but raised on the Isle of Man, Pierre Novellie is a true raconteur rather than just another 'stand-up' comedian. He says about his … END_OF_DOCUMENT_TOKEN_TO_BE_REPLACED

This show, Willy Hudson began by saying, is about himself. It is written by himself, is directed by himself and executive produced by himself. Almost … END_OF_DOCUMENT_TOKEN_TO_BE_REPLACED