Home » Reviews » The Lion, The Witch And The Wardrobe at Gillian Lynne Theatre

In some ways, this is the ultimate form of escapism: Narnia, as portrayed in this adaptation of CS Lewis’ The Lion, The Witch and the Wardrobe, is a fantasy world full of magical powers and talking animals. But both the narrative and the stagecraft can be very dark when they want to be – there’s nothing inherently wrong with that, and it seems to work quite well here, if only because for good to overcome evil, there has to be a substantial amount of evil in the first place for this to actually be a triumph over adversity story. 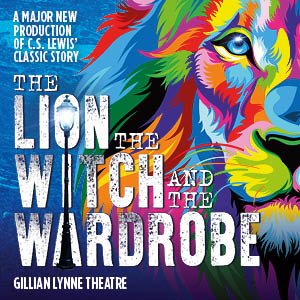 The use of magic, however, even having put aside the details in Lewis’ book and suspended disbelief at the theatre doors, seems rather selective. When Aslan (Chris Jared) declares there are deeper levels of magic that are beyond the reach of Jadis – the White Witch’s (Samantha Womack) actual name – one wonders why it took so long to use them. Two ‘daughters of Eve’ and two ‘sons of Adam’, Susan (Robyn Sinclair), Lucy (Delainey Hayles), Peter (Ammar Duffus) and Edmund (Shaka Kalokoh) – all siblings – arrive in Narnia, as the prophets apparently foretold, and the long and the short of it is that they are pivotal to the redemption of Narnia from a perpetual winter.

Naturally, a stage production isn’t going to answer every question raised, such as how the population survived a hundred years of winter, in which presumably agricultural crops could not grow in the usual way (there are some very logical and comprehensive explanations online, drawn from Lewis’ books, but as I say, they’re not part of the play’s narrative). But the show is spectacular when it wants to be, particularly in its costumes – it takes three actors to create Aslan’s full bodily form (Oliver Grant, Sean Lopeman and Shaun McCourt), while some of the creatures under the command of the White Witch sported crutches, which allowed them to move about in such a way that made them look larger than they would have been otherwise.

Aslan is, so Lewis’ fans tell me, a representation of Christ. Not here. His voice came across (at least to me) as someone on the brink of exhaustion, with a resigned weariness that does little, if anything, to reassure those looking to him for confirmation that everything will indeed turn out okay in the end. There’s nothing along the lines of, “Be of good cheer, I have overcome the world”, to quote St John’s Gospel, just scathing glares at children. And this is meant to be the good guy.

Meanwhile, Womack’s Witch may not have been the most menacing antagonist, though it is sufficiently sinister, without displaying the slightest hint of hamminess, and thus her portrayal of the character doesn’t solicit panto-esque booing. It seems her bite is worse than her bark, and there’s palpable fear in the Mr Tumnus (Jez Unwin) when the consequences of not following one of her many edicts becomes apparent. Ultimately, she soars, and in more ways than one.

Opportunities to witness actor-musicianship are abound, though this is a play with music rather than a full-blown musical, and anyone expecting the latter is going to be somewhat underwhelmed. Then there’s Father Christmas (Johnson Willis) who provides festive gifts for the children in the form of weapons (but not guns: it’s Narnia, not America) – dependent on your point of view, this is either the worst kind of Santa, or the best. It does take a while for the storyline to get going – there’s some unnecessary faffing about in the ‘real’ world with kippers, amongst other things, before the audience’s patience is finally rewarded. It’s too much of a spoiler to provide further particulars, but some impressive stage illusions help to maintain interest in a show that, while imperfect, delights its target audience.

Step through the wardrobe into the magical kingdom of Narnia for the most mystical of adventures in a faraway land. Join Lucy, Edmund, Susan and Peter as they wave goodbye to wartime Britain and say hello to a talking Faun, an unforgettable Lion and the coldest, cruellest White Witch.

Voted the nation’s favourite novel, The Lion, the Witch and the Wardrobe now comes to the stage starring Samantha Womack as the White Witch and is guaranteed to delight audiences of all ages.

The Lion, The Witch And The Wardrobe
Gillian Lynne Theatre, London

It wasn’t that long ago when anyone who gave warnings about Sleeping Beauty would be dismissed as more than a little ridiculous. The concern is that … END_OF_DOCUMENT_TOKEN_TO_BE_REPLACED

Alby hates themself, but can't work out why, and that irks them, even if they don't quite realise it. In this witty, occasionally unsubtle, but … END_OF_DOCUMENT_TOKEN_TO_BE_REPLACED

I have seen some outstanding acting recently at the intimate Finborough Theatre, and this new play is no exception. The highly talented cast quickly … END_OF_DOCUMENT_TOKEN_TO_BE_REPLACED

In the pandemic (remember that?) I worked in adult social care. My role was to help older people in their own homes with daily tasks - I’d cook meals, … END_OF_DOCUMENT_TOKEN_TO_BE_REPLACED