Home » Reviews » The Lion, The Witch and The Wardrobe at New Wimbledon Theatre

The Lion, The Witch & The Wardrobe at the New Wimbledon Theatre is a fabulous musical show with stunning special effects created by a terrifically talented team, onstage and off. It’s suitable for older primary age children and also adults unaccompanied by children, especially for those who read the book when they were young. The story set on stage by director, Michael Fentiman is true to the wonderful story written by CS Lewis. 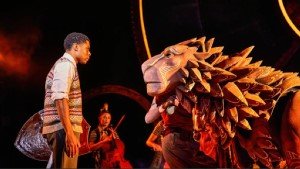 The plot tells of a family of four young evacuees at the time of the Second World War (apparently that this happened is often taught to older primary children in school). They are sent away from the city to stay with a kindly and wise professor in his house in which there is a wardrobe through which they can travel to the fantasy land of Narnia. A wicked and beautiful white witch rules as a tyrant queen over a court of menace in this place where, under her spell, it is always winter (with lots of snow) but never Christmas. On visiting, the children discover there is a prophecy that they shall liberate Narnia and they set about doing this with the assistance of an enchanting animal kingdom which includes one of the great and magical literary creations, Aslan, the lion.

There is a splendid ensemble and individual show-style singing to music with instruments constantly brought on stage. The choreography by Shannelle ‘Tali’ Fergus is superb and another fundamental contribution to the dynamism and success of this show. She and the Movement Consultant, Dan Canham along with Movement Coordinator, Tash Holway, magically conjure different moods and tones well as nuance through dance and movement with brilliance. In this show, there is often a large cast on stage together but there is never for a moment the sense of them being over-crowded or jumbled, everything is pinpoint sharp.

The special effects create wonder and awe. A dedicated member of the creative team, Chris Fishes, is responsible for Magic and Illusions – what a job he has done.

Lucy, the youngest of the four evacuee children is the pivot point for the plot and she is played perfectly by Karise Yansen. Samantha Womack plays the White Witch beautifully, channeling the terrifyingly impenetrable Ice Queens of literature. The special effects applied to her on stage stun the audience. Aslan, the great and good lion, another focus of the show, also amazes as a fabulous puppet designed by Max Humphries and directed by Toby Olie, with Oliver Bingham as the puppeteer. Aslan is also gorgeously and aptly played as a character by Chris Jared. Shaka Kalokoh who plays the disruptive and unreliable Edmund delivers his lines with wit and perfect timing.

The only problem with the show is that, apart from Lucy, the other ‘children’ appear too old for their roles. The boys who look like young men are dressed in the formal clothing of the 1940s, wearing loose proper trousers, button-up shirts and fair isle v-necks and while those are true to the period in which the story is set on stage in 2022 they look like adults not older children, not even teenagers. It is fundamental to the plot that these are four youngsters on an adventure without adults present. Lucy is supposed to be in the region of 9 (or younger) and this fits here. Edmund, the next youngest, is supposed to be about 11 years old and Susan and Peter are more sceptical teenagers of about 13 and 14. It might be quite difficult for children and young adults in the audience to visually identify this and relate to them as such, apart from Lucy.

Otherwise, this is a terrific show which will thrill and astound all who are lucky enough to go and see it. Some of the show is dark in tone and while older children will certainly enjoy that, it is not suitable for younger children, go without them. The age guide is 7-up which is right.

Direct from London, the acclaimed production of The Lion, the Witch and the Wardrobe is touring the UK starring Samantha Womack as the White Witch. Step through the wardrobe this spring into the magical kingdom of Narnia for the most mystical of adventures in a faraway land. Join Lucy, Edmund, Susan and Peter as they wave goodbye to wartime Britain and say hello to a talking Faun, an unforgettable Lion and the coldest, cruellest White Witch. The nations favourite novel, now on the stage.

There’s a warm and welcoming presence about Katie Arnstein anyway, although offering a sweet to audience members as we filed in helps too. Also, the … END_OF_DOCUMENT_TOKEN_TO_BE_REPLACED

The on-stage tiling makes it feel very much like certain scenes are set in a swimming pool, which may be stating the obvious but in a performance … END_OF_DOCUMENT_TOKEN_TO_BE_REPLACED

“I am a little bit of a nerd,” smiles Joe Sellman-Leava, playing himself, or at least a version of himself he’s willing to portray to audiences at the … END_OF_DOCUMENT_TOKEN_TO_BE_REPLACED

This is the kind of show that will preach largely to the converted, if not the choir itself, although this is probably by default rather than design. … END_OF_DOCUMENT_TOKEN_TO_BE_REPLACED

Cabaret is not just the name of a highly successful musical and film, but according to my good buddies at Wikipedia is a form of theatrical … END_OF_DOCUMENT_TOKEN_TO_BE_REPLACED