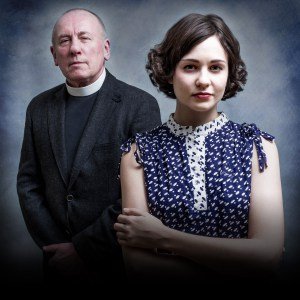 The Living Room tells the story of a young Catholic woman who after her mother’s death goes to live with her elderly family members.

The story starts with the arrival of Rose and Michael, the executor of her mother’s will who is a married man in his 40s. It becomes apparent immediately that the two are lovers, a fact that does not fail to register with Rose’s relatives, the strict Helen, her sister Teresa and their brother James, a priest who is in a wheelchair. Helen is determined to keep the two apart.

The chemistry between Rose and Michael is vital to make this story believable, and sparks truly fly between the two. At one point Rose sucks on Michael’s finger, while looking up at him with eyes that sparkle with desire, and the way they keep sneaking touches behind people’s backs feels realistic despite the age gap.These small intimate moments have looks filled with promises and you feel they are just one touch away from losing control and ripping each others’ clothes off.

The oldest character, Teresa, is masterfully played by Caroline Blakiston. Teresa is kept in the dark about what transpires around her for most of the play, and while her confusion is part comic relief that works, there’s a gentle desperation to her when she realises she is being kept in the dark. Teresa is in ways the heart of the play, the gentle soul that finds strength and when she finally takes charge, it is powerful to everyone around her.

Diane Fletcher’s Helen is a very complex character who appears trapped by her religious piety and fear of death. She displays a strong need to control everyone around her, and manipulates Rose into staying with the family. You have to wonder how she grew to become like this, and if she has the capability of opening up to grief and fully dealing with emotions, which appears to be what she fears the most.

But the meat of the play is with Father James. His conversations with Rose, which are increasingly honest and without judgement, are at the same time thought provoking and amusing. Rose attempts to shock him, but as a Catholic priest who used to take confessions, he has heard everything and instead of talking down to her he challenges her and makes her think. Unfortunately that’s the last thing Rose wants, she wants to be told what to do. You feel for Father James, who wants more than anything to be able to help someone again, and has gotten a second chance to be useful by being there for Rose.

In some ways, Rose is a very passive character. She is determined and strong against her Aunt Helen, but when it comes to love she is inexperienced and naive, and when she can no longer hide from the reality of the consequences of her affair with a married man, she cannot cope.

Every character goes through a journey of growth through the play, and as you leave the theatre you find yourself wanting to stay a bit longer and see what happens to all of them next. There are many questions left unanswered, just like in life. It isn’t wrapped up with a neat and tidy happy ending, instead you feel you’ve seen something that at the core of it feels real.

If there’s one thing to criticize, it’s the odd choice of having the actors sitting with their backs to the audience  during some scenes.  It’s more difficult to grasp a character’s thought process when you don’t see their faces. It also takes away some of the magic when the paralysed priest keeps moving his legs under the blanket. But these are minor nitpicks on an otherwise very interesting and engaging production.

The Living Room was written by Graham Greene in the 1950s, and this is the first major revival of the play.

It is 2002 – another Royal Jubilee year, and HRH (Mary Roscoe) is due to open a new Science wing in a 'sink' comprehensive where Dr Derek Jones … END_OF_DOCUMENT_TOKEN_TO_BE_REPLACED

Dr Anna LaRosa (Dr Stefania Licari) has a lot to say. Just as well, as she’s the only one on stage in this medical comedy, which largely draws its … END_OF_DOCUMENT_TOKEN_TO_BE_REPLACED

Nikhil Parmar’s one-man show, originally written as a TV pilot, manages to touch on a wide range of themes from Islamophobia to modern fatherhood with … END_OF_DOCUMENT_TOKEN_TO_BE_REPLACED

Handel’s 1738 opera Serse (or Xerxes) is an exploration of power, love and human frailty. King Serse falls in love with the voice of his brother … END_OF_DOCUMENT_TOKEN_TO_BE_REPLACED

Lea Salonga has her fans. She also has some superfans, the ones who yell, “I love you Lea!” at almost every opportunity. If that wasn’t enough, there … END_OF_DOCUMENT_TOKEN_TO_BE_REPLACED