If someone discovers their spouse or partner has been lying about something, however trivial, it is, I suppose, quite natural to wonder what else they’ve been lying about. Such is the issue faced by Martha (Joanna Karlsson) who pops downstairs to the kitchen in the middle of the night to find out what, if anything, is going on. Hermann (Alan Booty) is up to something- he says he suspects a burglar. But of all the objects in the kitchen, and indeed elsewhere in the house, to whack an intruder with, why does he have a bread knife in his hand? 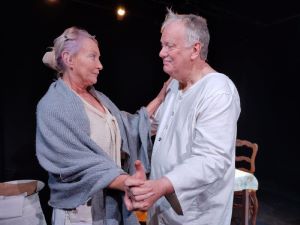 The setting of post-war Hamburg could have been the gateway to a depressing show, but while there is talk of hardship, there are also plenty of stories about happier times. I wonder if recollections of childhood events from the distant past is a mechanism by which the couple can, in a sense, ‘forget’ about the horrors of the more recent past.

Then there are the jokes in the dialogue. Whether one finds them funny through contemporary lenses is almost beside the point, because some of them were ‘whisper jokes’ – they had to be told in private, because if someone overheard, they might snitch to the Nazi authorities and the joke teller would be found guilty of the Third Reich’s Treachery Act 1934, which effectively restricted freedom of speech. I warmed to some of the punchlines, and it was strangely comforting to discover (or rather rediscover) there were at least some people in Germany who highly disapproved of Hitler’s regime and amongst themselves voiced criticisms through satire and observational wit. It’s also important that Martha makes the point, as she does, that they might have done more to effectively push back against Nazism, if only they knew what precisely those things were.

The dialogue as a whole, however, comes across more like a stream of consciousness than a structured storyline, and it wasn’t the easiest of narratives to follow for that reason. Martha speaks at length about how concerned she is for her mother’s welfare, having not heard from her for some time. Apparently, she can’t get her out of her mind and worrying about her is dominating her thought patterns. I say ‘apparently’ because it isn’t long before she’s talking, again at length, about something else entirely.

Interestingly, to me at least, is the complete lack of discussion about their children, especially as they talk about their parents in considerable detail. Did they just not have any, or were they killed in the war? I suggest the former, given that their trip down memory lane would almost certainly have included some references, however minor, though one can never be sure. It is, despite the physical lack of confectionery – these are hard times, which an argument over the loaf of the show’s title – a sweet exchange of anecdotes and reminisces. It’s very pleasant, but the flip side of this is a lack of dramatic tension. Still, this thoughtful and steadily paced production left me wondering what I would do if I were Martha. What would I be willing to sacrifice to make someone else happy?

Hamburg. World War Two is over. Food is still scarce. So, when hungry Hermann creeps into the kitchen to steal an extra slice of bread at 2.30 a.m., he gets a shock when his wife Martha catches him red-handed.

Martha is dismayed because she feels that he has broken their agreement to ration the bread equally between them.

This apparently small incident takes on an ever-increasing emotional significance as past, present and future come under close scrutiny.

“The times they are a-changin'”, as Bob Dylan put it - and as a deceased woman’s grandson (Phillip Jones) returns home to attend the funeral, the … END_OF_DOCUMENT_TOKEN_TO_BE_REPLACED

It’s not often that the entertainment tastes of an intellectually snobby middle-aged woman and an action-mad 10-year-old boy align perfectly, but … END_OF_DOCUMENT_TOKEN_TO_BE_REPLACED

Notre Dame is the latest digital production by Threedumb Theatre, live-streamed from The Space in Canary Wharf, London and directed by Stephen Smith, … END_OF_DOCUMENT_TOKEN_TO_BE_REPLACED

Icarus has fallen, and Minos has her dead to rights in an open-shut court case, but perhaps another story might be found. An interesting premise, an … END_OF_DOCUMENT_TOKEN_TO_BE_REPLACED

The latest production at the intimate Finborough Theatre boasts a visually striking set designed by Sarah Beaton on a traverse stage, with the … END_OF_DOCUMENT_TOKEN_TO_BE_REPLACED