Set in the round – well, technically, ‘the square’, having the audience surrounding the stage brings attendees closer to the action, which adds all the more to the living room ambience. The phone rings and rings and rings, in the days when Nokia ringtones were all the rage: but there’s a reason why Ben Harcourt (Ben Lydon) isn’t keen on answering it. Whatever the reason is, Abby Prescott (Madeleine Dunne) can’t see why he can’t just turn his phone off (a nod, perhaps, to general irritation caused by phones ringing during performances in the theatre). 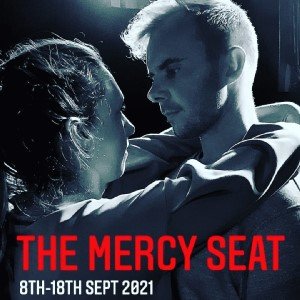 It is the morning immediately following the ‘9/11’ terrorist incidents in New York, Arlington County and Pennsylvania – and this couple are, like so many others, at a crossroads. Unencumbered by scene changes, the action is fairly continuous, with Abby making occasional, but always brief, exits from the front room (and thus the stage). It’s a tad contrived – neither character is preventing the other from leaving, but the near-ninety minute running time also almost necessitates that both stay and attempt to sort out and work through what they were already discussing.

Given the privacy of the show’s setting, and that it’s not as if they’ve only recently met for the first time, Ben’s reticence is somewhat surprising, at least until his true intentions become clear: he’s been building up to a big reveal, but his plans have been significantly derailed by the terrorist attacks and their immediate emotional and psychological impact. It’s an interesting take on what happened in 2001, and a credible one at that. With the benefit of hindsight, it may seem odd that seemingly ordinary matters are being discussed in a show set the day after a very significant event in the recent history of the United States, and indeed the world, but it demonstrates well that life carries on, and nobody’s problems disappear just because mass tragedies have occurred elsewhere.

The dynamics of the pair’s relationship are distinctly American – a dissection of what they consider to be irony isn’t a patch on irony in Blighty – and on several occasions, either party will simply demand the other states a viewpoint or response to something specific. I was less convinced by the narrative than I was by the actors’ performances: would Abby really give up a decent job and New York City lifestyle to start a new life with someone who has never looked at her directly during bedroom activity? Then again, love can and does make people do unusual things.

There are some amusing moments in the show, especially in the couple’s sarcastic tones with each other. The pair are seeking to – and this is as crude as it sounds – capitalise on the tragedy. To state precisely how they intend to do this would be revealing too much, suffice to say their plans do not involve any more deaths or anything of the sort. Morality, nonetheless, is neither here nor there as far as these two are concerned, though it was difficult on occasion to maintain interest throughout in this deeply introspective tale in which not a huge amount actually happens. It also doesn’t help that neither character is likeable in the slightest. But at least there’s some convincing acting to enjoy, as well as some palpable chemistry between two characters who simultaneously love and can’t stand each other.

In the wake of a devastating attack, Ben & Abby contemplate a new life together. He was meant to be in the office yesterday, when it happened, but instead Ben chose to visit his boss and mistress, Abby in her downtown apartment. Now his phone won’t stop ringing. With his wife and kids left in the dark, Ben believes he can start again if only Abby is willing to play along…

As the sun rises on a new world, the pair must decide – is this a national tragedy or a meal ticket?

LaBute’s haunting drama is a vicious power play of brutal truth and scathing wit set against the backdrop of a momentous disaster. This new intimate production reveals our own self-serving morality in the face of human suffering in a play that is as compelling and relevant now as it was twenty years ago.

The descriptions of what happens in this show are so vivid that paradoxically they leave nothing to the imagination – and, at least at the performance … END_OF_DOCUMENT_TOKEN_TO_BE_REPLACED

As theatre productions go this is a memorable, magical experience filled with heart and love and so many tiny thoughtful details, that I’m not sure a … END_OF_DOCUMENT_TOKEN_TO_BE_REPLACED

There are no props at all in Dog, and yet despite a dog, Roy, being very much a key character, the staging and dialogue are more effective than they … END_OF_DOCUMENT_TOKEN_TO_BE_REPLACED

Be astonishing. That’s Derek Jarman’s exhortation to the world at large and - at the end of the show - to this particular audience. And in this … END_OF_DOCUMENT_TOKEN_TO_BE_REPLACED