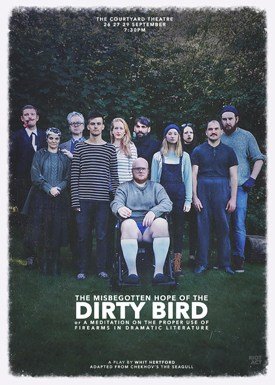 The family is at the heart of many plays – both dramatic and comedic – and it’s no surprise really as the tensions within family units can produce an unlimited amount of fun for playwrights and actors alike to explore. This exploration is done to great effect by Whit Hertford with his fine play “The Misbegotten Hope of the Dirty Bird” at the Courtyard Theatre.

The play starts with handyman Yakov (Laurence Bourne) giving the audience an insight into who the dramatis personae are – starting with Peter Sorin (James Beaumont) who is living by a lake with an entourage of family and friends. Having retired from politics, Peter is hoping to spend his last years – he is pretty ill – amongst his loved ones. We have his actress sister Irena (Cheska Hill-Wood) a woman who takes self-obsession to new levels and in the process pretty much ignores her son Konstantin (Chris Kendrick) a young writer who wants to change the world’s perception of theatre. In the garden of the house, Konstantin is putting on a play for his family and the other members of the household, including his mother’s latest boyfriend, the famous writer Boris Trigorin (Justin Stahley). Unfortunately, Konstantin’s avant garde, deeply symbolistic, piece, as performed by neighbour Nina (Haeleigh Royall) is a bit too much for the assembled guests and very quickly descends into farce much to the writer’s consternation. Konstantin finds this difficult to take and attempts to commit suicide. Luckily he is unsuccessful and after being patched up by Dr Eugene Dorn (Cameron Robertson), goes in search of Nina with whom he is infatuated. However, things become further complicated for both Konstantin and Irena as there is an affection blossoming between Boris and the ambitious Nina, who wants to escape from her life and become a famous actress. It is all a bit confusing for everyone and things don’t get any better when we return to the lakeside house two years later and see the profound changes in everyone’s life.

“The Misbegotten Hope of the Dirty Bird” is a great translation of Chekhov’s play ‘The Seagull’ which left me with a bit of a dilemma. There is a lot of unrequited love and pining for things you cannot have and a longing for those you had once and, whilst I felt it was a really great and powerful piece of work, I’m not 100% sure I understood it fully. However, I really think that this was a failing in me rather than the piece itself and I thoroughly enjoyed the performance as a whole.

The use of a thrust stage to make the best use of the performance area worked really well, though from where I was sitting there was a bit of swift head turning needed at times to keep everyone in view. Writer/Director Whit Hertford kept the narrative moving well and I really loved his use of Konstantin to not only inform the audience of the passage of time which rather subtly gave us an insight into the mind of the young writer. And I have to say, whilst the entire cast were very talented, I was totally blown away by Chris Kendrick’s performance as Konstantin. From his first moment on stage, where he painted a very telling word on the side, through to the emotionally draining final scene, Chris delivered a wonderfully impassioned and completely believable tale of the ultimate in tortured artists.

Summing up then, “The Misbegotten Hope of the Dirty Bird” is not a light play. There is a lot of humour in the first act – sitting next to Irina and Boris and hearing their comments about Konstantin’s play was actually hilarious – and the writing is matched by some very fine performances. You may not necessarily grasp every nuance of the story, but that won’t matter as you leave the theatre knowing you have seen something pretty special.

Company: Riot Act
Writer: Whit Hertford
THE MISBEGOTTEN HOPE OF THE DIRTY BIRD
or A Meditation on the Proper Use of Firearms in Dramatic Literature
A new adaptation of Chekhov’s dark comedy, “The Seagull” by Whit Hertford which visits the residents of a lakeside estate where the has-beens, never-haves and the would-like-to-haves equally wrestle with their own ambitions of greatness and the calamitous ruin of success.
Produced by Riot Act.