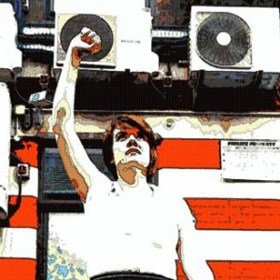 I once had a job in a corporate head office once, and lasted 1 year and 49 weeks. I only remember this length of tenure because a) various people thought I was absolutely barmy to resign from a full-time permanent job with a pension in the middle of the 2008-2012 recession, and b) my department had to do what the Americans call ‘potluck’ – that is, bring your own dish – to my leaving shindig, because I didn’t qualify for having food and drink paid for by the company. I hadn’t clocked up the qualifying minimum two years of service. The rules, my line manager was categorically informed, are not there to be broken. The Miserables thus served as a reminder of those (non) halcyon days, a time in my life when the soul-destroying rat-race left me feeling depressed and occasionally even suicidal.

Just as well, then, that the show sends up corporate life in this parody of the hit musical from which the show’s title is derived. The exhilarated feeling that Claire (Gemma Seren) expresses when she completes her final shift is palpable, even if it’s not quite clear what she intends to do with herself now.

The General Manager (Spencer Lee Osborne), is very nearly a singing David Brent (he of the television series The Office), quickly establishing himself as someone who needs his secretarial staff more than they need him. There’s also Beth (Stephanie Watkins), newly recruited to take over from Claire – when the pair scoot off for lunch there’s the almost inevitable parody of ‘Empty Chairs at Empty Tables’.

I really mustn’t divulge too many details, suffice to say there’s a lot of truth in the behaviour of the characters as they are portrayed – sometimes highly unorthodox and irrational. Even if not all of the dialogue is amusing, it is unfailingly accurate throughout.

I think it was a good choice of musical to parody (and to pay tribute to), as the relatively mellow music stops the narrative from flowing at what would otherwise have been quite an exhausting breakneck pace. While it is a tad repetitive in parts – one or two punchlines are duplicated through song until they’ve more than outlasted their welcome – it was always easy to follow what was going on.

Seren has the strongest singing vocals of the trio; the ensemble numbers work well though. This isn’t, I must admit, going to be to everyone’s taste. Taking tunes from a West End stalwart production and creating adapted lyrics from them will be seen in some quarters as more than a little lazy. But it’s a way of virtually ensuring the audience leaves humming some very familiar tunes, and with a smile.

What I can say is that I certainly enjoyed watching this show, and I am all the more pleased to have walked away from that sort of working life, a ‘miserable’ existence indeed. I said to a few people whose company I particularly enjoyed when I left that rotten corporate environment that one of these days I would look back and laugh at the frustrations and absurdities I was so vexed about at that time. That day has come. Or, to put it another way, “the time is now, the day is here.”

The Miserables is a nearly-new musical comedy for anyone who’s ever hated their job.
Claire is Land of Laminates’ most jaded employee and finally has the opportunity to leave her job. Beth is looking for a challenge to go along with her brand-new pay rise, but is fighting a serious addiction to dating apps. Their boss spends way more time with his Blackberry than he ever does with his wife. Life at the corporate headquarters of a mid-level laminate flooring company is, as it turns out, pretty miserable.

Harold Shipman, known to his many patients, family and friends as ‘Fred’, was Britain’s worst serial killer. The official inquiry into his crimes … END_OF_DOCUMENT_TOKEN_TO_BE_REPLACED

Being one of Arthur Miller’s best-made and most challenging plays, The Crucible is also one of his most frequently performed. I was going to say … END_OF_DOCUMENT_TOKEN_TO_BE_REPLACED

To be fair, Linda Lavin called her concert Love Notes, there’s an album of the same name, and that’s more or less what it was about - variations on … END_OF_DOCUMENT_TOKEN_TO_BE_REPLACED

Noughts & Crosses is a euphemism for blacks and whites. The Noughts are the whites and the Crosses are the blacks. In the world of the play, the … END_OF_DOCUMENT_TOKEN_TO_BE_REPLACED

This ‘juke box’ musical offers highly polished, undemanding, feel-good entertainment, showcasing, as it does, 30 songs dating from the 1960s to the … END_OF_DOCUMENT_TOKEN_TO_BE_REPLACED