Home » Reviews » The Old House at the Hen and Chickens Theatre 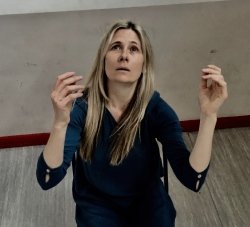 Written by and solely performed by Kate Maravan, The Old House is a compelling, thought-provoking, bittersweet, yet amusing in parts, one-act play.

The play begins at a motorway station where ‘Mother’ and ‘Daughter’ have stopped en route to “The Old House” (a place they had spent many happy family holidays 40+ years ago). The production is a rollercoaster of emotions throughout. The feelings range from hurt during an early scene where ‘Mother’ struggles to recognize ‘Daughter’ and also cannot remember her own granddaughter to later on where during a more joyous moment, ‘Mother’ appears to recognise her daughter and tells her that she’s beautiful and that she loves her. Throughout the play, the look on Daughter’s face is worried, yet hopeful as she tries to understand her mother’s condition. Meanwhile, Mother’s face often shows confusion and fear although there is also a lighter, fun side as she recalls stories of years gone by.

Kate Maravan’s script and storytelling is thoughtful and reflective as well as being touching and, at times, humorous. Kate’s delivery is clever; changing the pitch of her voice and the speed of her delivery as well as her stance in order to portray two very different people. As the daughter, she gives a couple of excellent, reflective monologues as the character recalls a sad time in her own life and also when speaking about her mother’s condition emotionally referring to it as the “A”/”D” word. The production also cleverly uses voiceovers in a couple of the scenes as the discussion between the ladies continues.

Kath Burlinson’s direction is well-paced and in keeping with the overall tone of the piece as does Adrienne Quartly’s sound. Vincent Manna’s movement direction is clever and the production is enhanced by Kate’s mimicry (I particularly enjoyed the scene where Mum, eyes sparkling, sprang to life, almost dancing, as she remembered her young carefree days).

The Old House is a well-staged production making full use of the space. Its sole prop is a chair, which is used both as a car and as a bed.

Overall an enjoyable if, at times, heart-wrenching production.

Memory, loss, mother and daughter relationships and the hokey-cokey. Revisiting The Old House, Mother and Daughter hang on to fragments of what they know and discover each other anew. Losses surface as seawater pushes and pulls over the shingle. Grief, laughter, liberation from the known, the wonder of the ordinary ebb and flow.

Inspired by my mother, The Old House is aimed at audiences interested in new writing, devised work, comedy drama, innovative story telling. Anyone with a mother, anyone with a daughter, people with elderly parents or grandparents, those curious about or with experience of dementia.

Titus Andronicus is not usually a comedy, it is usually a bloody, villainous and vengeful tale, but tonight it is a comedy and a rather amusing one at … END_OF_DOCUMENT_TOKEN_TO_BE_REPLACED

This show is not without clichés - there are three of note in this production. Firstly, the French horn of the show’s title is personified, speaking … END_OF_DOCUMENT_TOKEN_TO_BE_REPLACED

There’s very little in the way of set in this show: aside from chairs, a few crash barriers and at one point, a red carpet, the actors’ movements … END_OF_DOCUMENT_TOKEN_TO_BE_REPLACED

South African born, but raised on the Isle of Man, Pierre Novellie is a true raconteur rather than just another 'stand-up' comedian. He says about his … END_OF_DOCUMENT_TOKEN_TO_BE_REPLACED

This show, Willy Hudson began by saying, is about himself. It is written by himself, is directed by himself and executive produced by himself. Almost … END_OF_DOCUMENT_TOKEN_TO_BE_REPLACED