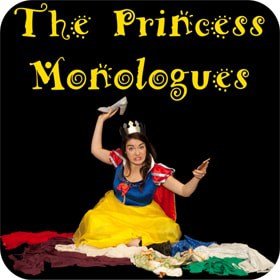 One woman with a stage to herself for one hour turned out to be surprisingly enjoyable and insightful. As a man, I was worried I’d feel completely alienated from the subject material. That worry turned out to be unfounded. Eleanor Dillon-Reams demonstrated a remarkable level of versatility and skill in portraying seven very different contemporary ‘princesses’.

Seven talented writers challenge the audience with brief glimpses of their princess’s life. Balancing humour with difficult, hard-hitting topics, we learn about what it means it be a princess in the 21st century. Without it descending into melodrama, private lives and struggles are expressed with vivid realism.

My guest, an American, praised Dillon-Reams’ convincing and consistent American accent in #Shame (Eliza Power). Dynamite II (Tilly Lunken) opens the show: an unsteady Emma attempting to enact her errant sister Diana’s last performance. It’s a bold opening; we’re immediately curious to learn more about the dynamic between Diana and Emma. The backstory gradually unravels; in just a few minutes we feel integrated into their lives.

Dillon-Reams’ has a wonderful ability to make eye contact with every audience member, drawing each of them in and thus each performance feels personal. At times, it can feel unsettling, such as in Simon Jay’s Home Made Princess; however, this adds to the sense of realism. Stories that would otherwise seem ordinary become extraordinary; it’s a humbling reminder that every person has their own struggles and challenges to overcome.

I especially enjoyed Princess Frankenstein by Claire Booker; can she surgically create the perfect man? (No, it turns out, but not before leading us through a hilarious tour of her struggling love life.) To an extent, it’s a farcical spoof, but I suspect most of us will sympathise with the mechanics behind Frankie’s rational. How many of us (men included) have wanted to piece together the best traits of multiple people to create the ‘perfect’ partner? Sense of humour from here, physique from there, and intelligence, empathy and ambition from other sources. It’s almost an exploration of what it means to be human in ten too-short minutes.

Some, such as Mr Andersen’s Princess (Amy Bethan Evans), take on complex, multi-layered levels of symbolism. Others, like #Shame, are perhaps lacking in subtlety but remain rich in meaning. At any rate, the musical interludes between each monologue leave little time to ponder the intricacies behind each performance before the next princess takes her place. Nevertheless, there is plenty to think about for the journey home.

Tessa Hart’s direction is competent, making effective use of a few props and Dillon-Reams’ considerable abilities. As an audience, we’re very much drawn into the worlds of these different characters from the UK, Australia, USA and other places.

For those who rarely venture beyond the West End, a trip to Clapham may not seem worth it. However, exploring London’s fantastic fringe theatre scene is a rewarding experience, and at a fraction of cost of the big well-known productions. The Bread & Roses Theatre works well as a venue and made for the perfect setting for these monologues.

If the audience were to be exposed to full versions of the seventy-four songs listed in the programme, it would be a very long show indeed. I suppose … END_OF_DOCUMENT_TOKEN_TO_BE_REPLACED

How can a play be both charming and devastating? Through its tight script, abundant humour and pitch-perfect performances, 4th Country manages to … END_OF_DOCUMENT_TOKEN_TO_BE_REPLACED

Britain, so a London cab driver once told me, is obsessed with the Second World War, as though it happened just recently. Power Luncheon would seem, … END_OF_DOCUMENT_TOKEN_TO_BE_REPLACED