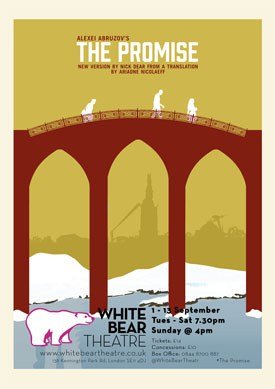 This surprisingly well furnished production of Alexei Arbuzov’s The Promise leaves little to the imagination, allowing the minds of the audience to concentrate instead on the consequences and wider themes brought out by the dense text. It is slightly too repetitive in places, particularly in the first act, however this was indicative of the repressed nature of living in a war zone. There is some suffering – Lika (Eleri Jones), Marat (Tony Eccles) and Leonidik (Theo St Claire) in Leningrad (now St Petersburg) in 1942, and are therefore under siege. This siege is an exercise in endurance for the audience too. I am not suggesting the public is paying to be subjected to something bad; rather, the play fully immerses its audiences in the hard struggles its characters face.

The attention to detail, including exact amounts of food rations and times of day/night, build a harrowing picture of the standard of living (or lack thereof). But those who stay the course are rewarded. After the first interval (there are two), the Second World War is over, and everything brightens up, quite literally: the lights in the room are actually on. The dialogue does not make this clear but it is a reasonable assumption that there were blackouts in the war – at times it was a struggle to even see the characters on stage in Act One.

It was Ariadne Nicolaeff’s translation of the Russian text into English that removed some complex (from a Western perspective) Russian terms of endearment, as well as some nicknames that would have otherwise have required some explanation. Nick Dear’s adaptation, presented here, goes further to take out some extraneous elements, whilst still remaining faithful to the original play.

There are many scene changes as the evening progresses: there are two ways of analysing this. One is to say there are too many of them, and the set changes break up the tension and fascination created, such that the actors must work to recreate their characters’ strong emotions all over again.

And again. And again. The other, which is my own conclusion, is that the play is so incredibly concentrated and intense that it needs these breaks in the action (as well as both intervals) to allow the audience to absorb what has just gone on and, as it were, to come up for air, before diving deep once more.

Eleri Jones’ Lika is stoic and understated, while Tony Eccles’ Marat is confident and engaging. Eccles has one of those really lovely velvety voices: you could listen to him read out the classified football results and be engrossed. It’s Theo St Claire’s Leonidik, however, who stands out the most for me, an assured and robust performance of an eccentric man and mildly successful poet.

The play progresses at a fairly slow and steady pace. The silences in the dialogue are uncomfortable enough to create awkwardness but not long enough to allow my mind to start wandering off on a tangent. It’s a deep but worthwhile story that follows through well, and explores what happens after the main course of events extremely well. While other shows may leave things open-ended, or otherwise gloss over where the characters end up in a rushed epilogue, The Promise sees things through to the end properly. It’s a conversation starter, too, with some of the finer points being animatedly debated by some audience members in the bar during the second interval.

That all three of our characters survive World War Two relatively intact and remain in contact with one another for years afterwards is about as plausible as Joey in War Horse making it back to Devon (that is, not very). Still, the personal struggles in a Communist society that come to light in the play serve as a poignant reminder that even in the depths of war, there are still very many people living very real lives and finding very real love. An ambitious and fascinating production with an unexpected ending, the company provides a clear and powerful demonstration of the empty feelings that come with looking back on promises made in the past and how comparatively little has been accomplished to date. And that’s something many people can relate to, even if they’ve never been anywhere near a war zone, let alone found themselves under siege. Recommended.

The Promise
1st to 13th September 2015
White Bear Theatre
Equapoise Theatre presents Aleksei Arbuzov’s The Promise. A new version by Nick Dear from a translation by Ariade Nicolaeff.
After losing everything to the war, teenagers, Lika, Marat and Leonodik have found each other. But will friendship and a place to call home be enough for that friendship to survive? And is there any room for love in a time of war?
Arbuzov’s classic reveals what it means to grow up, fall in love, and sacrifice what you have because you have no other choice.
Nick Dear’s new adaption is presented by the new company Equapoise Theatre.
http://whitebeartheatre.co.uk/

“Keep it shallow, keep it pretty, keep it moving,” declares Justin Vivian Bond, letting the audience determine for themselves what precisely is really … END_OF_DOCUMENT_TOKEN_TO_BE_REPLACED

This play didn’t do that well on Broadway the first time around in 1963, and did worse the second time around, even with a revised script, running in … END_OF_DOCUMENT_TOKEN_TO_BE_REPLACED

One of the very few good things about the COVID pandemic is that the opportunities to live stream theatre performances have increased exponentially, … END_OF_DOCUMENT_TOKEN_TO_BE_REPLACED

Exploring both the Jewish and Christian faiths, Candlesticks in some ways puts forward some good arguments for systems of belief that exist entirely … END_OF_DOCUMENT_TOKEN_TO_BE_REPLACED