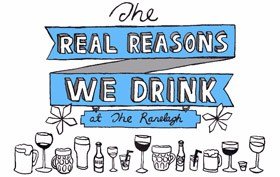 It’s one thing to stage a show in a theatre either above or behind a pub. It is quite another to stage one in a section of the pub proper, with all the challenges of projecting sufficiently over and above the regular conversation of the rest of this local Bounds Green pub. Travelling Tent has done just that, however, combining historical research and a great many anecdotes from across the generations, in The Real Reasons We Drink.

It is very well constructed, and as educational (for me anyway, not having ever lived or worked in Bounds Green or its neighbouring areas) as it was entertaining. Virtually all of the notable local events since the Ranelagh pub has been in operation are reported: interestingly, there was a much louder cheer for the opening of Bounds Green London Underground station than there was for the opening of the North Circular Road.

This is a remarkably tasteful production. It comes close to being risqué on occasion, but it pointedly resists having a dig at other pubs in the vicinity or any neighbouring communities. The presenters, Eleanor Harding, Miriam Sherwood and Annie Ward, are flanked by some of the very people they interviewed as part of their research into why it is that so many Bounds Green residents have made the Ranelagh their ‘local’. They give their accounts with refreshing honesty. I was particularly impressed with Trevor, who seemed to be a pillar of this community (and even, if I understood correctly, a former prospective parliamentary candidate, albeit for the Green Party), who bluntly announced that by 2004, the Ranelagh had turned to “sh*t”. Many others concurred, and the pub is indebted to him for his campaign to have the place substantially refurbished and placed under more competent and engaging management.

Looking back, it is surprising how much was packed into 80 minutes, with recorded interviews, three ‘musical interludes’, a game show, and a pause in proceedings to pass around champagne to mark the point in the historical narrative at which the Ranelagh opens. While the changes of ownership and directly relevant Acts of Parliament are documented, the show’s main strength is in the personal stories, which are, in their own ways, either poignant, utterly irreverent or downright hilarious.

There’s a decent amount of audience participation, too, with the presenters even being cajoled into taking a vote to decide how ‘Ranelagh’ should be pronounced: the majority vote went to ‘Ran-lee’, as opposed to ‘Ran-ler’ or the alleged historically accurate ‘Ran-er-lah’ (which made me think of ‘La-di-dah’). It was also extraordinary to see some great-grandchildren of former Ranelagh publicans and Bounds Green locals in the audience.

Whether stopping for a quick pint with your best man and groomsmen before your wedding, or the first port of call after becoming a father for the first time, it became clear that there is still very much a place for a great community pub in this day and age. For one young man, Alex, the friendships made at this pub helped him to grow in confidence and go on to achieve things in his own life that were previously thought implausible.

I found this exploration into the history of the Ranelagh a most rewarding experience, and wonder how many more pubs across London could benefit from a similar appraisal, with the same level of detail, as given in The Real Reasons We Drink. There are minor technicalities, which, with a little work, could be ironed out to give a smoother and more polished performance. Nonetheless, I would invite you to see a similar show – if only I could: no further dates or venues are forthcoming at the time of writing. I do hope this isn’t the last outing for this fascinating production.

The Real Reasons We Drink is an experiment in bringing local history to life.
In a performance curated and presented by its regulars, a pub will become the setting and the subject of a pointedly personal, entirely subjective presentation of its own history – for one night only.

The Ranelagh pub in Bounds Green, North London is the social centre of its community. It’s been the spontaneous pint, the all-nighter, the first date, the hair of the dog & the unofficial babysitter since 1861

The Real Reasons We Drink is part of The Ranelagh Story Project, funded by the Heritage Lottery Fund. Stuart Hobley, Head of Heritage Lottery Fund London, says, “Going to the pub is such an intrinsic part of our culture and our grant will help communities to tell those tales and enjoy history at the same time.”