Home » Reviews » The Red Candle – Mermaids in the East – Review 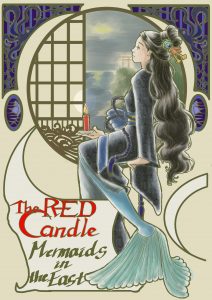 Sometimes, a play is not just a play and a ballet is not a ballet. However, for some theatrical aficionados, the different genres of theatre have to be kept in individual silos not allowed to mix.

However, Théatre Lapis are a company that believe in challenging these ideas of exclusivity and their latest production The Red Candle, Mermaids in the East which is at the Brunel museum in Rotherhithe is a case in point.

Based on ‘The Red Candles and the Mermaid’ a folk tale by Mimei Ogawa, The Red Candle, Mermaids in the East tells the story of a young girl who is brought up by an elderly couple of candle makers. The young girl has a secret and her adopted parents do everything in their power to protect their daughter and stop this secret from getting out. The girl is very talented at making candles and the local villagers believe they have magical powers. The family lived a happy life for years until the girl hit her fifteenth birthday when a friend of hers offers to take the girl up to the mountain shrine, with dramatic results that have wide-ranging implications for the girl, her parents and the village as a whole.

Director Yojiro Ichikawa Hassall has taken Nozomi Abe’s writing and mixed ‘straight’ acting, interpretive dance, singing and puppetry that fuse together to tell the story of the child and her family with a grace and beauty you seldom see in a traditional show. The cast of Hannah Abbott, Misaki Asakura, Giorgio Borghes, Hélène Kösem, Victoria Reeve and Laura Witz, deliver a great show and their skilful interpretation of the story really holds the attention of the audience from start to finish. Although dressed completely in black, each member of the cast retain their individual personality and using a mixture of movement, song, and acting – together with some huge pieces of material, really breathe life into this story. Composer Rie fu’s songs, beautifully played by pianist Ayaka Ono, are haunting and work really well as the sound echoes off the walls of the Brunel tunnel.

David Meunier-Palmer has created an effective and atmospheric lighting scheme that illustrates the story really well.

Overall, I enjoyed The Red Candle, Mermaids in the East a lot. The story is a simple one but it is brought to life really well by the cast and crew, who perform in the round and provide a very entertaining performance. Although we don’t normally mention the venue, there is something that feels really apt about the Brunel Tunnel as not only a performance space but the location for this production. Although occasionally, I missed some of the dialogue due to the echoing sounds bouncing off each other. However, this didn’t really detract from the beauty of the piece being performed and overall, I had a thoroughly nice time seeing this show. One word of warning, when you go to see it, make sure you wrap up nice and warm as it gets ruddy cold in the Brunel shaft.

However, do believe me when I say that it is worth getting frozen tootsies to see this lovely and beautifully delivered production.

Minimalist theatre and traditional Japanese music introducing Japanese culture. A response to the earthquake and tsunami that hit Japan in 2011, but an echo of grief caused by all human and natural disasters

THE RED CANDLE
Mermaids in the East by Théatre Lapis
4-20 November 2016
The Grand Entrance Hall at The Brunel Museum, Railway Avenue, Rotherhithe, London, SE16 4LF
The Thames Tunnel Underground Shaft is below ground: the air is cool so please dress warmly.

Everyman is one of the earliest printed plays, originally written in Middle English and first performed around 1510. It is a morality play, popular … END_OF_DOCUMENT_TOKEN_TO_BE_REPLACED

After being closed for over two years due to covid, the Arcola Theatre has re-opened with Barney Norris’s love song to the people who raised him, We … END_OF_DOCUMENT_TOKEN_TO_BE_REPLACED

Now in its 15th year, La Clique have firmly established their place on the world burlesque circuit and this year’s London cast bring their infamous … END_OF_DOCUMENT_TOKEN_TO_BE_REPLACED

Warm, funny and lacerating, Satinder Kaur Chohan’s new play opens with a fly-on-the-wall look at the daily attempts women make to be accepted and … END_OF_DOCUMENT_TOKEN_TO_BE_REPLACED