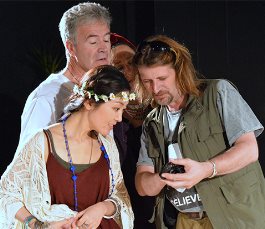 The School of Light at The White Bear in Kennington started with promise and humour full of the potential of a sitcom or comic drama, lying somewhere on the spectrum between Peep Show and Jonathan Creek. Sadly the entertainment tailed off around half way through, which was unsurprising given that the only storyline was a non-committal romance-come-salvation plot concerning the two most ‘normal’ characters in the motley crew comprising the School of Light. That being said, with an edited script, plot development and clearer direction, the idea behind this performance has the scope to become a truly entertaining watch. I hope that this is a work in progress for the moments of flair were certainly worth watching.

The objective of the play was relatively clear in the exposition of a plot with a host of excellently characterised individuals for which the credit must go to the cast; the sceptic arrives unwittingly into the midst of a meeting of social misfits who are taking comfort in the company of equally maligned pariahs whilst also being conned by a sleazy shaman who preys on their individual vulnerabilities. They are followers of unconventional wisdom, the tarot, UFOs and the Zodiac being amongst their areas of expertise. The vulnerabilities of the sceptic are of course all too clear and he somehow winds up being rescued by Sunflower, the youngest, prettiest and most eligible member of the group. With no plot development or subtlety there is no dramatic suspense and as such the moments of humour wander frequently but uncertainly into the field of out and out comedy; this falling between two stools, of outright comedy and drama, is the one major criticism of the play which discomfits an already nervous audience (the choice to stage this in the round is intimidatingly intimate).

The pace of the play was spot on, ensuring that the audience wasn’t left with the sense that the actors were being self-indulgent. However it did feel as though the production from writing to rehearsal had been rushed and unthought out. There were some disparate moments of greatness but an unsure audience is unwilling to give themselves up to only moments and neither the script nor direction were decisive enough to inspire confidence in the performance in its entirety.

There is some noteworthy talent among the cast; Yuna Shin was beguiling and earnest as Sunflower displaying the only real professionalism in terms of stagecraft and stage presence; Eden Ford playing the neurotic Keith, convinced of imminent alien invasion, was extremely funny, and Nicholas Koy Santilllo was convincingly hilarious as the dour harbinger of doom and gloom that had never quite left his adolescence behind. The set design was detailed and thorough and added to my enjoyment of the play. I would hope that this construct will be added to and worked on because for a Sunday afternoon of entertainment it had the right inspiration, simply not always the right delivery.

The School of Light
Do you believe in the healing power of crystals, the threat of hostile extra-terrestrial life-forms, or perhaps that your fate can be divined by studying the movements of the planets? Do you believe in spirits? Reincarnation? How about the dark realms of necromancy and the occult?

Amateur astronomer Harry finds himself spending an evening in the company of a group of people who entertain what are, for him, irrational and bizarre ideas. They call themselves The School of Light…

The School of Light is a bold and entertaining look at spirituality from writers Ian Dixon-Potter and Robert Pope. 

The School of Light
11th to 29th August
The White Bear Theatre
Tuesday to Saturday at 7.30pm
Sunday at 4pm
http://whitebeartheatre.co.uk/

It is 2002 – another Royal Jubilee year, and HRH (Mary Roscoe) is due to open a new Science wing in a 'sink' comprehensive where Dr Derek Jones … END_OF_DOCUMENT_TOKEN_TO_BE_REPLACED

Dr Anna LaRosa (Dr Stefania Licari) has a lot to say. Just as well, as she’s the only one on stage in this medical comedy, which largely draws its … END_OF_DOCUMENT_TOKEN_TO_BE_REPLACED

Nikhil Parmar’s one-man show, originally written as a TV pilot, manages to touch on a wide range of themes from Islamophobia to modern fatherhood with … END_OF_DOCUMENT_TOKEN_TO_BE_REPLACED

Handel’s 1738 opera Serse (or Xerxes) is an exploration of power, love and human frailty. King Serse falls in love with the voice of his brother … END_OF_DOCUMENT_TOKEN_TO_BE_REPLACED

Lea Salonga has her fans. She also has some superfans, the ones who yell, “I love you Lea!” at almost every opportunity. If that wasn’t enough, there … END_OF_DOCUMENT_TOKEN_TO_BE_REPLACED