Matt Doyle is one of those actors that gets just as much pleasure as doing off-Broadway (or even off-off-Broadway) productions as he is doing Elder Price in the Broadway production of The Book of Mormon. Doyle remains a cast member of the Broadway revival of Company, which began previews on 2nd March 2020, and suspended performances due to the coronavirus pandemic ten days later. It is, apparently, one of the only Broadway shows to have some form of pandemic insurance. 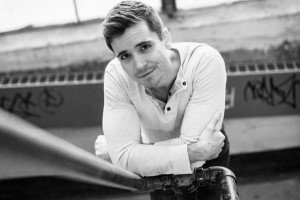 Doyle’s singing range is remarkable, hitting the high notes in ‘I Believe’ from The Book of Mormon and ‘Joanna’ from Sweeney Todd seemingly effortlessly. While he has the privilege of having a role in a high profile production of a Stephen Sondheim musical to return to when government restrictions are lifted, there was a time when the future looked less rosy, to the point where Doyle contemplating leaving the entertainment industry, or at least the world of musical theatre, altogether. He never got as far as explaining what sort of career path he would have pursued (a hypothetical point in any event) – having seen and heard him perform in this online concert, it would have been a significant loss to the theatre world if he had sought opportunities elsewhere.

He still has his work cut out to get the roles he would like – auditioning for Company, the production’s director, Marianne Elliott, was convinced he was best suited to play Paul, although he thought he would be at his best playing Jamie (Amy in previous productions: this one ‘switches’ every character’s gender around). He got his wish in the end. There were stories about lesser-known shows, a couple of which never made it to Broadway, let alone across the ocean to the West End, including Brooklynite, a show about superheroes that bring some sort of utopia to Brooklyn. It appealed to Doyle, as someone who has indulged in superhero stories since childhood, to the point of writing comic books himself, including one written some years ago in which, as it happens, the world is turned upside down by a global pandemic, and superpowers arise from a vaccine gone wrong.

There were plenty of laughs in the recollections of on-stage mishaps. Doyle doesn’t do things by halves – if there was no comedy value in a story, it’s because it was, frankly, difficult to listen to. A sobering account of being bullied as a schoolboy included instances of being hit so hard he lost consciousness, and being bundled into a ‘dumpster’ (a large wheelie bin). It was good to hear ‘Being Alive’ from Company in a musical theatre concert complete with spoken dialogue, which doesn’t normally happen, and I must admit I hadn’t even heard of Jasper in Deadland The Musical, though the narrative seems to be remarkably similar to Hadestown. I didn’t know, either, that Doyle was at one point slated to take on the role of Marty McFly in Back to the Future the Musical, before that show’s original director, Jamie Lloyd, left the production.

Entertaining and eye-opening, this was a pleasant 100 minutes from one of musical theatre’s rising stars.

The Seth Concert Series is the critically acclaimed weekly virtual series based on Seth Rudetsky’s international Broadway series that began at The Art House in Provincetown ten years ago.

Matt Doyle plays Jamie in the new Broadway revival of Company. He recently starred in the world premiere of the Huey Lewis musical The Heart of Rock & Roll at the Old Globe Theater in San Diego. Matt’s Broadway credits include The Book of Mormon (Elder Price), War Horse (Billy Narracott), Spring Awakening (Hanschen), and Bye Bye Birdie (Hugo Peabody). National tour credits include Spring Awakening (Melchior). Off-Broadway credits include Sweeney Todd, A Clockwork Orange, Brooklynite, and Jasper in Deadland. Regional credits include West Side Story at Paper Mill Playhouse, Jasper in Deadland at the 5th Avenue Theatre in Seattle, and Giant at Dallas Theater Center. Film and television credits include The Code (CBS), a recurring role on Gossip Girl (Jonathan), and Private Romeo (Glenn). Matt has performed at Carnegie Hall with the New York Pops and continues to perform his sold-out solo show throughout New York City in addition to performing with symphonies across the country. Recordings include Bare (Peter). His album, Uncontrolled, is available on iTunes.

It’s a production of Hamlet that starts at 7:30pm and manages to come down on the ‘right’ side of 10:30pm - the hardcore fans and followers of … END_OF_DOCUMENT_TOKEN_TO_BE_REPLACED

For seasoned theatregoers, this version of The Three Musketeers comes across as one of those shows that takes a similar format to something one has … END_OF_DOCUMENT_TOKEN_TO_BE_REPLACED

Already in a good mood because there is abundant free parking after 1.30pm on a Saturday (and all-day Sundays) near the venue, Little Angel Theatre’s … END_OF_DOCUMENT_TOKEN_TO_BE_REPLACED

There’s an air of familiarity for people who have been in the entertainment industry in this narrative. Global pandemic or not, supply always exceeds … END_OF_DOCUMENT_TOKEN_TO_BE_REPLACED

This was originally meant to be called West End Musical Christmas, and got postponed as the Government had no choice but to impose another lockdown - … END_OF_DOCUMENT_TOKEN_TO_BE_REPLACED