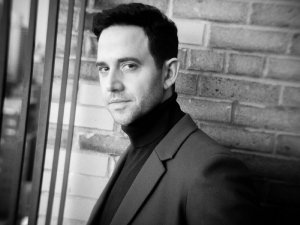 Santino Fontana is so versatile that not only does did he voice both parts, Hans and Anna, in a rendering of ‘Love is An Open Door’ from Disney’s Frozen, he’s as comfortable in a play as he is in a musical. This gave rise to some unusual conversations in a musical theatre concert series – it isn’t often that plays by Oscar Wilde and Arthur Miller get referenced in a show otherwise full of showtunes.

In his formative years, Fontana played piano in church services but wasn’t a chorister. Perhaps surprisingly, given his credits to date across stage, television, movies and audiobooks, he wasn’t the go-to leading man as a student. He seems to like defying convention, not attending a prestigious drama school, and deploying unusual training techniques, including one in which a quarter (a twenty-five cent coin) is strategically hidden by him, or whoever the leader or facilitator is. The students are then asked to find it. They may never do so in the time available, but the aim (from what I could gather) appears to be to act as though they will. It’s all about being convincing.

There was also a hugely intriguing story about why Fontana didn’t quite make it to press night during a Broadway revival of A View From The Bridge. He had hit his head on an on-stage table for some reason but made it through to the end of the performance. A medical friend advised him in a late-night phone call that all should be okay, provided he doesn’t throw up. Hours later, he threw up, but it was only some days later, after another actor (from a different show, who had come to a preview performance) pointed out something really wasn’t quite right, that he finally sought further medical advice. In layman’s terms, the consultant told him, his injuries were equivalent to being in a road traffic collision.

It wasn’t so much that he found himself staying at home for two weeks in a dark room, in order to allow the brain to recover, boring as that must have been. He was asked if he had any ‘non-cognitive skills’ as there was a possibility at one point that he may not retain the ability to learn lines and do all the things that actors do on stage, such as being at the right place at the right time. The story may have taken some time, and may have been fewer songs than other episodes in the series of similar length because of it, but it raised awareness of several issues, not least regarding safety for actors and crew working on productions.

There were plenty of lighter moments, including a brief performance from Fontana’s wife, Jessica, who put in a sublime and amusing rendering of ‘Vanilla Ice Cream’ from She Loves Me, and a range of both familiar and not-so-familiar tunes sung by Fontana – I had no idea, for instance, there even was a musical based on the Kurt Vonnegut novel God Bless You, Mr. Rosewater (just as well, then, that it’s never been performed, at least not professionally, on this side of the Atlantic). Something for almost everyone (in terms of musicals), with showtunes written by Comden and Green, Rodgers and Hammerstein, Frank Loesser, Jerry Herman and even a modified version of ‘I Feel Pretty’ from West Side Story.

A tour de force performance from a highly engaging and likeable Broadway star.

Santino Fontana starred most recently on Broadway as Michael Dorsey in the stage musical adaptation of the film Tootsie, for which he was awarded the 2019 Tony Award for Best Actor in a Musical. He was previously nominated for a Tony Award for his starring role as Prince Topher in Rodgers & Hammerstein’s Cinderella on Broadway. Fontana originated the role of Tony in the Broadway production of Billy Elliot and was awarded the 2010 Drama Desk Award for Best Featured Actor in a Play for his work in the revival of Brighton Beach Memoirs. He has also appeared on Broadway in the revivals of Sunday in the Park with George, The Importance of Being Earnest, Hello, Dolly!, Moss Hart’s Act One and in the Encores series productions of 1776 and Kurt Vonnegut’s God Bless You Mr. Rosewater. He provided the voice of Prince Hans in the Walt Disney Animation Studios film Frozen and the sequel Frozen 2, and starred on television in the CW romantic musical comedy-drama Crazy Ex-Girlfriend as well as appearances in Fosse/Verdon, Mozart in the Jungle, Shades of Blue and Submissions Only among other television and film appearances. In 2005, as a member of the Essentials, Fontana co-wrote the musical comedy Perfect Harmony and originated the role of Philip Fellowes V. In 2006, he starred as Hamlet in The Guthrie Theatre’s production of the Shakespearean classic, before moving to New York City to star as Matt in the Off-Broadway revival of The Fantasticks. He is married to actress Jessica Hershberg.