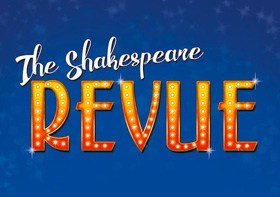 The best bit about The Shakespeare Revue, currently at Richmond Theatre, is the talent on the stage. Their performances awoke in me a strong desire to return to the original and re-read more of Shakespeare.

The original production in 1994 at the Barbican was devised by Christopher Luscombe and Malcolm McKee for the Royal Shakespeare Company. McKee here is director and MD of this touring production, and in this show is the consummate professional on stage on the piano throughout.

Lizzie Bea is an upcoming star of the future. A member of the National Youth Theatre and National Youth Music Theatre, she has a strong presence that stands out without overshadowing. I felt for her when she and Anna Stolli, with her beautiful soaring soprano, tried to get the Richmond audience to sing along to a panto style-song, and even to get the two halves of the theatre to compete. Alex Morgan and Alex Scott Fairley are also talented performers who showed a strong mastery of the material and the vocals. It was truly endearing to observe the heroic commitment of all four cast members.

Richmond should have been propitious hunting ground in terms of audience profile, with presumably a high literacy in terms of all things Shakespeare, so it was surprising that the cast did not do a single curtain call. Perhaps the popularity of shows such as The X Factor and Britain’s Got Talent, on screens annually since 2004 and 2007, has changed audience expectations of the revue format. And this is specifically revue, not variety.

Certainly in the 1990s it was a fresh and witty idea to turn a national institution into a series of revues – the magic “S” word works in almost any context. Tragedies such as Hamlet and Macbeth, and their orgiastic series of deaths, naturally lend themselves to comedy. The parts of The Shakespeare Revue that exploit this are brilliant and have stood the test of time. It is also lovely for those who remember the originals to have sketches from Beyond the Fringe and Monty Python. The self-parody of the acting profession was also amusing and enlightening. The show brings a concept that seems at times almost pre-war, laughing into the 21st century.

There were few costume changes. The day dress in the first half gave the curiously intimate feel almost of being in the rehearsal room. Evening dress in the second half lifted the rather spartan, minimalist set. It was lovely to hear genuine classics such as ‘Brush Up Your Shakespeare’ and ‘Let’s Do It’, reminding the audience of just how irreplaceable the talents of Noël Coward and Cole Porter are.

For contemporary revue to stand a chance against the competition in theatre, on television and online, it does however need to be edgy in its comedy, in its prurience or in its dance and preferably all three. The Shakespeare Revue stays within safe boundaries in all three areas. Some content was updated to reference characters such as Donald Trump and the US election. But perhaps with so much challenging material on our television screens at the moment, a bit of old-fashioned, predictable comedy at the theatre is to be welcomed.

Titus Andronicus is not usually a comedy, it is usually a bloody, villainous and vengeful tale, but tonight it is a comedy and a rather amusing one at … END_OF_DOCUMENT_TOKEN_TO_BE_REPLACED

This show is not without clichés - there are three of note in this production. Firstly, the French horn of the show’s title is personified, speaking … END_OF_DOCUMENT_TOKEN_TO_BE_REPLACED

There’s very little in the way of set in this show: aside from chairs, a few crash barriers and at one point, a red carpet, the actors’ movements … END_OF_DOCUMENT_TOKEN_TO_BE_REPLACED

South African born, but raised on the Isle of Man, Pierre Novellie is a true raconteur rather than just another 'stand-up' comedian. He says about his … END_OF_DOCUMENT_TOKEN_TO_BE_REPLACED

This show, Willy Hudson began by saying, is about himself. It is written by himself, is directed by himself and executive produced by himself. Almost … END_OF_DOCUMENT_TOKEN_TO_BE_REPLACED