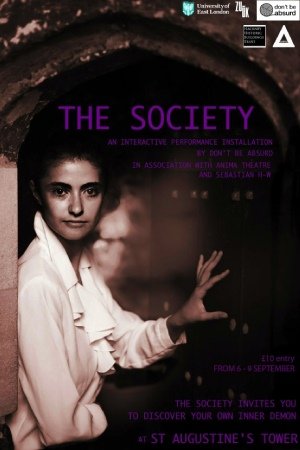 Set in St Augustine’s Tower, Hackney, the conceit of this “interactive theatre installation” by the performance art theatre company Don’t be Absurd is that you have been invited to become a member of The Society, an ancient and secretive body whose precise nature is revealed at the outset for those who have not seen the barely legible flyer or, perhaps more likely, were unable to decipher it.

On arrival, all applicants are greeted by a witch by whom, after some amusing banter, they are led to the first level and an encounter in which they are asked to identify their inner demons. This is followed by the most entertaining encounter of the evening as the applicants are prompted by a well-tailored gnome to undertake a ritual and inscribe their innermost fears or desires on a parchment.

A narrowing set of steps leads to the floor above from which, after identifying a talisman, the applicants are eventually directed to the third floor. Of this there is little to be said other than that what takes place there would probably have been more effective on the floor below, where a clock is ticking, while the more spacious third floor would make a far better location for what happens on the second.

In the final stage, the applicants “ascend” to Satan’s realm where, after a small but effective coup de theâtre, he actually makes an appearance, pontificating about the nature of evil. What can be seen in the final stage is certainly stunning but, frustratingly, Satan’s banal, self-pitying ramblings have little to do with the spectacular surroundings and the opportunity is missed to engage the audience with the wider world. Similarly, little effort is made to answer the question posed on the flyer – “What does it mean to be bad in 2019?” – although the “installation” closes with an instruction by Satan to do something that, very much against the spirit of the times, simply adds to the capital’s mountains of litter.

While this bemusing experience is a laudable effort to find a way to engage people with an unusual historic building there are significant shortcomings. Happily, some if not all of these could be addressed fairly easily. Disappointingly, the script does not in any way touch on the history of the tower and insufficient attention is paid to the surroundings, especially in the final space. Finally, the “series of games” promised on the flyer is an exaggerated and inaccurate description of the encounters, which are not always as sharp as they should be nor, sometimes, are they well suited to their location.

Most importantly, as there isn’t any warning on the flyer, be warned that The Society is unsuitable for anyone significantly overweight or with a fear of heights or confined spaces and further that, because the tower steps are of an inconsistent depth and one is heavily eroded, the section in which one is required to wear a mask is at best challenging and at worse unsafe.

Audience are invited to enter the mysterious former church tower, and join a crew of spirits drawn from the European legends of Walpurgis Night, meeting Witches, Demons, and – if you’re lucky – an elusive Gnome. They can undergo an initiation into this motley society, via the discovery and activation of their own ‘Inner Demon’, as well as exploring snippets of the original legends ‘spoken’ by the Tower itself – through interactive audio-installation embedded throughout the space.

How can a play be both charming and devastating? Through its tight script, abundant humour and pitch-perfect performances, 4th Country manages to … END_OF_DOCUMENT_TOKEN_TO_BE_REPLACED

Britain, so a London cab driver once told me, is obsessed with the Second World War, as though it happened just recently. Power Luncheon would seem, … END_OF_DOCUMENT_TOKEN_TO_BE_REPLACED

William J Dunleavy, author and star of this monologue play, is a writer and face to watch. He enters the room (as the staging is more geared towards … END_OF_DOCUMENT_TOKEN_TO_BE_REPLACED

Cirque du Soleil’s Luzia is a joyful whirl through a psychedelic Mexico, which reminds us why live theatre is so special. Anyone who goes to … END_OF_DOCUMENT_TOKEN_TO_BE_REPLACED