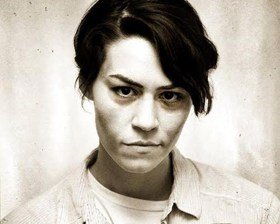 John Hayes is about to be executed. He is a murderer, who killed his father and his lover for no apparent reason, and with no compunction. A psychopath. The State is about to do away with him and good riddance.

Well, not exactly. John Hayes is, technically, a woman called Elyese. Elyese is of course aware of John’s existence, and thus, she is aware of what s/he has done. She feels agonising grief for the dead lover but cannot connect her grief with her own behaviour. As she talks about her life, weaving between Elyese and `John’, the disconnection is eerie. In a typical moment, she fondles the pink hair ribbon that belonged to her dead lover, cuddles it like a small child, even weeps over it but somehow never actually connects to the fact that she is responsible for the tragedy. There were several memorably desperate moments, notably when the actress twisted and crumpled with inner anguish and when, finally she beat at herself, the killer and the bed she sat on, as if wanting to rip the whole world apart.

As the author says in a programme note, ‘this is a play about love and what people are capable of when faced with it.’ This is true and what is also shown is the other, more horrifying truth, that when love is only itself, a pure emotion divorced from any concern for others or any reality outside feeling itself, the lover is capable of anything, even killing to preserve it. Love in an extreme and damaged form, the author is saying, is love, nonetheless.

I was gripped by this insight into the twisted logic of John/Elyese’s mind, although I did wonder what was the point of the piece beyond the creation of this tortured individual, wandering in some kind of mental wilderness, far beyond our ability to identify.

The performance by Lucy Roslyn (who also wrote the script) is extraordinary. Thin, elegant, beautiful in an androgynous way, with a huge toothy grin and mirthless laughter punctuating her story, she is the embodiment of something that is purely evil and at the same time completely human. Ms Roslyn also plays all the other roles: her victim, the prison guard who is also her lover, and of course, both characters of John/Elyese. She does this with no apparent change – just a shift of body weight, a gesture, a breath, and she has become the other character. This is a gripping and disturbing hour of theatre.

“I would do anything for someone I loved”
Huntsville prison, Texas, 1959; Elyese Dukie is on Death Row for murdering her husband and her lover. Tomorrow she goes to court for the last time. But tonight Elyese reveals the one thing she won’t tell the court or the string of psychiatrists sent to diagnose her: that she is not alone in her cell… John Hayes is in there with her.

Psychopath or seductress? Murderer or manipulator? Psychiatric hospital or the electric chair? What does she deserve? Lucy Roslyn’s striking one-act, psychological thriller has its London debut touring the UK. This multi award winning play, based on extensive research into real-life female killers is laced with dark humour so get your front row seats for this death row drama.

Everyone’s vexed in this show, though some have clearer reasons to be than others. Mrs Driscoll (Tameka Mortimer) is struggling with a home life that … END_OF_DOCUMENT_TOKEN_TO_BE_REPLACED

The penultimate production of the 2021 Tête à Tête Opera Festival, based at London’s Cockpit Theatre and showcasing contemporary and avant-garde new … END_OF_DOCUMENT_TOKEN_TO_BE_REPLACED

Relatively Speaking premiered in 1967 and is the sort of show that is, by contemporary standards, very much of its time, and not just because of … END_OF_DOCUMENT_TOKEN_TO_BE_REPLACED

For those who don’t know, MARIO is the title character of the bestselling video game franchise of all time, which began in 1983. These days he is an … END_OF_DOCUMENT_TOKEN_TO_BE_REPLACED

Al (Cameron Corcoran) has managed to bring company home with him. His wife, Louise (Polly Waldron) didn’t get so much as a text message in advance of … END_OF_DOCUMENT_TOKEN_TO_BE_REPLACED