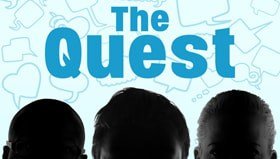 The idea is so simple, that it is easy to dismiss it: you take ordinary people who are willing to share a story (or two) and you pick the best ones for a showcase event and then, eventually, a festival. On 22nd October 2016, the rich, vibrant history of London’s Hoxton Hall provided the location for the culmination of the inaugural, informal Tellit festival. The event’s director, Michael Kossew, had spoken beforehand of his inspiration, “I want to create a festival that celebrates truth, honesty and vulnerability, and provides a supportive platform for anyone to share their own story. I am so excited to be bringing the first festival of its kind to the UK so more people can experience the power of true stories.”

With his intentions fully realised, this final event, marked as The Quest, was notable for its breadth and diversity. A steady stream of men and women of all ages and races relayed their personal stories for the benefit of an attentive audience. This ranged from the serious to the embarrassing, and the somberly reflective to the outrageous. This included Tom Kane with his recollections of encountering a ghost; Charlotte Mooney’s shocking, but blissfully ignorant (at the time, at least), experiences at the hands of a Pinochet henchman/sympathiser in Chile during the gap year from hell; and many more besides.

Cleaved into two halves and launched with a live song performance for each section, the tone was set for an intimate divulgence. The way that the programme was constructed, the gathered were dragged through the whole gamut of emotions. That dreaded phrase ‘emotional rollercoaster’ was made for experiences such as this, but, above all, this was a satisfying, memorable and invigorating piece of stage performance. It is a cliché that everyone has a book in them. Well, if that is the case, then it certainly true that we each have at least one compelling story. And yet, the art is also in how they are told. The striking thing about this event was that none of the storytellers were in any way professional to this art, or experienced to any degree. Perhaps the shared talent that they had was that they instinctively know how to capture – and then enrapture – an audience. Unfaltering in their telling, with a keen entreaty to the gathered, they transfixed all those present.

Not only entertaining, but inspiring too, the Tellit Festival was a celebratory dip into the events – great and small – that somehow shape our life, or, at the very least, provide us with a cherished memory or a pointed lesson. It is these moments that make up the fabric of our existence. The overwhelming success of Tellit Festival and its 2016 edition begs for a return next year. It would be travesty not to see this branch out and continue from here forward.

Tellit is the UK’s first ever festival of true-life storytelling. The Quest is the showcase event of the festival and the culmination of a search to find the UK’s best true stories.

Featuring storytellers from The Moth, Spark, Speak Easy Storyslam, Flashlight, Narativ and Natural Born Storytellers who will share stories about the theme “lessons”.

If the audience were to be exposed to full versions of the seventy-four songs listed in the programme, it would be a very long show indeed. I suppose … END_OF_DOCUMENT_TOKEN_TO_BE_REPLACED

How can a play be both charming and devastating? Through its tight script, abundant humour and pitch-perfect performances, 4th Country manages to … END_OF_DOCUMENT_TOKEN_TO_BE_REPLACED

Britain, so a London cab driver once told me, is obsessed with the Second World War, as though it happened just recently. Power Luncheon would seem, … END_OF_DOCUMENT_TOKEN_TO_BE_REPLACED