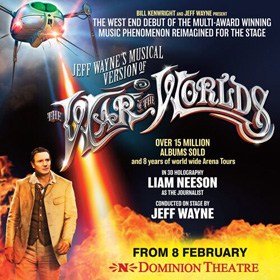 Making their West End debuts are iconic actor, musician, and writer Jimmy Nail, singer-songwriter Daniel Bedingfield, and former Sugababes popstar Heidi Range. Joining them are West End stars Michael Praed (The Sound of Music, Palladium) and Madalena Alberto (Evita, Dominion). Completing the cast is the legendary David Essex who previously starred as The Artilleryman on the original double album of The War of The Worlds.

The show also features Liam Neeson in sight and sound, the iconic Martian Fighting Machine, special effects, and a live orchestra conducted on stage by Jeff Wayne. This phenomenal new production playing for a strictly limited run at London’s Dominion Theatre is not to be missed.

Confession time: I know nothing about The War of the Worlds! I am glad that this has now been rectified. For the performance that I attended, Daniel Bedingfield was ill so the understudy, Simon Shorten, played The Artilleryman.

The curtain lifted to reveal the orchestra on stage, which was excellent. It was fantastic to watch them at work with the superb orchestration. Jeff Wayne conducting was a treat for any The War of the Worlds lover – this I was told by my companion who was raised with The War of the Worlds. The set itself was minimal with certain props or features being set as needed. There were a lot of drops lowered and raised throughout for the projections to be visible on.

The lighting was phenomenal. It isn’t often I think that when watching a show but this was immersive, complementing and enhancing what was happening on stage, not just visually but with the orchestra as well. Yes at times it was blindingly bright but I found I got used to that fairly quickly and just went with it.

There was contemporary dancing throughout the performance which complements the music as the orchestra do their thing. At times I thought the dancing was a little bit lengthy and unnecessary but remembered that they were using already written music so they were somewhat restricted with what they could do. I wasn’t convinced about the alien tripod that appears on stage and thought it might have been better if they’d just stuck with the projected versions. Speaking of the projections I can see how some people could think these might have been better toned down. I think it worked quite well given the vast majority of the performance is orchestral so the projection and choreography helped to break it up.

Okay so when you hear an understudy is on for the performance your heart drops a little as you wanted to see the person originally cast, or at least that is what happens for me. All I can say about Simon Shorten as The Artilleryman is – he was fantastic! A flawless performance including the worryingly high song so it was a pleasure to have my worries knocked completely out of the park as it were.

David Essex played The Voice of Humanity and even when he wasn’t doing anything, still oozed a coolness that most people can only dream about. I struggled to hear some of his singing as his voice wasn’t as strong as many others on stage, but David Essex!!

Heidi Range was Beth, Parson Nathaniel’s wife. Range gave a solid performance although there were times that I felt the sound levels could have been adjusted on her microphone as the orchestra seemed to loud. When I could hear Range’s voice clearly, she sounded wonderful. Which was a relief as I admit being a little concerned if the Sugarbabes’ pop star would be up to it. Again worries were unfounded and I should stop being judgemental!

George Herbert, The Journalist 1898, was played by Michael Praed and there is nothing else to say than he was fantastic. A safe pair of hands who delivered exactly what you would want for the part, a great voice and a stage presence to go with it.

Liam Neeson as The Journalist 1904, was inspired casting. Listening to Neeson narrate the show was wonderful. The man’s voice is perfect for it. From the point of view of a War of the Worlds novice, I would highly recommend you go and see this if you can. If they can sort out the sound levels this will be a 5 star show.

The War of The Worlds
Jeff Wayne’s global music phenomenon is reimagined and brought to spectacular life for its much anticipated world stage-premiere. This new production features a star cast, full supporting company, Liam Neeson in 3D holography and on screen, the iconic Martian Fighting Machine, special effects, and a live on-stage orchestra conducted by Jeff Wayne.

The ground-breaking score, which has enjoyed over 15 million double albums sales and a staggering 330 weeks in the charts, includes the unforgettable hits The Eve Of The War, Thunder Child and Forever Autumn. Set in Victorian England and inspired by the famous H.G. Wells novel of the same name, The War Of The Worlds tells the devastating story of the invasion of Earth by Martians, as seen through the eyes of a journalist, his loved ones and those he encounters.

“No one would have believed, in the last years of the nineteenth century, that human affairs were being watched by intelligences which inhabited the timeless worlds of space… and yet, minds immeasurably superior to ours, regarded this Earth with envious eyes, and slowly and surely, they drew their plans against us…”