It’s a sad tale, as the audience is duly informed at the start of the show, but before it reaches the point of melancholy and woe, there are a lot of other emotions to get through, in a performance that makes good use of a large variety of techniques and styles all in an hour. Mary Ann Haynie (1889-1968), who became known as Mabel Sands (Natisha Williams-Samuels) because Al G Barnes (1862-1931) (Antonio Victorio), who ran a circus bearing his own name, decided on Mabel Sands as an appropriate stage name. Sands, placing more importance on joining the circus in the first place than the retention of the use of a family name she didn’t care much for anyway, went along with it – it’s not like she was to be called by something ridiculous or incriminating. 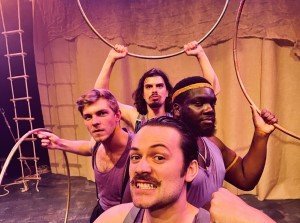 Stark’s parents, Lela and Hardy Haynie, died (separately) when she was young, leaving her orphaned by the age of seventeen. As this production’s narrative would have it, she was taken in by strict Presbyterian aunts, the kind of religious people who were clear about what they were against but vague about what they were for. The circus, they insisted, was “the devil’s work”, a position that Barnes did not disagree with. Stark was hired for apparently having circus legs, which seemed to mean they were good for dancing. Being a part of a travelling circus was better, in Stark’s view, than remaining at home with those stifling and condescending opinions from unpleasant aunts.

She is impressed by the use of animals in Barnes’ circus, and decides she very definitely wants to become a “tiger tamer” – unsurprisingly, her request to become one is denied, at least initially, until it’s pointed out that if audiences were to see a woman in the ring with a tiger, this would increase the shock factor and the circus company’s bottom line. In other words, people would want to see it happen.

Massive bedsheets are used, more than once, to create sea waves. A particularly impressive moment comes when the sheeting is shaped into the clear outline of an elephant. As for the tigers, they appear in various ways, with puppets being the favoured method. Throw in a fair amount of actor-musicianship as well, and it’s a busy production. Sit in the front row at one’s own risk. I would say precisely why, but it’s too much of a spoiler.

Then there’s Rajah (Edward Breckenridge), who is a cub when presented by Barnes to Stark, but inevitably gets larger and more ferocious with the passing years. Stark doesn’t exactly enjoy an injury-free career, and indeed when a critical incident occurs (though not to her personally), the ‘health warning’ at the top of the show about this being a sad story feels justified. That the focus is not solely on Stark may be a cause for complaint for some but misses the point: it’s often said in the industry that it takes a village to make a show. So it was with Barnes’ circus, with a lot of people pulling together to make things happen. This is a show that roars with passion and charm in equal measure.

Welcome, ladies and gentlemen, to a tale of love, excitement, danger and very sharp claws.
Unveiling the true story of a forgotten woman, Tiger Lady acts as a powerful vehicle to amplify under-represented voices. Mabel Stark, the queen of the circus in the time of the greatest show on Earth, was one of the first ever female tiger tamers, and the only woman to step into the ring with seven tigers.

Harold Shipman, known to his many patients, family and friends as ‘Fred’, was Britain’s worst serial killer. The official inquiry into his crimes … END_OF_DOCUMENT_TOKEN_TO_BE_REPLACED

Being one of Arthur Miller’s best-made and most challenging plays, The Crucible is also one of his most frequently performed. I was going to say … END_OF_DOCUMENT_TOKEN_TO_BE_REPLACED

To be fair, Linda Lavin called her concert Love Notes, there’s an album of the same name, and that’s more or less what it was about - variations on … END_OF_DOCUMENT_TOKEN_TO_BE_REPLACED

Noughts & Crosses is a euphemism for blacks and whites. The Noughts are the whites and the Crosses are the blacks. In the world of the play, the … END_OF_DOCUMENT_TOKEN_TO_BE_REPLACED

This ‘juke box’ musical offers highly polished, undemanding, feel-good entertainment, showcasing, as it does, 30 songs dating from the 1960s to the … END_OF_DOCUMENT_TOKEN_TO_BE_REPLACED