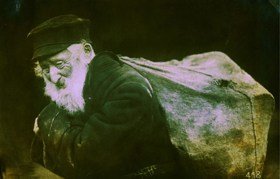 It goes back to the saying, ‘money can’t buy you happiness,’ but yet we still want as much of it as we can get.

When Judke the gravedigger’s son is burying his pet dog Schutschke, he finds a substantial amount of gold coins. He subsequently hands them all over to his sister Tille, after refusing to trust his parents with them. Tille is determined to be a millionairess, even if it is just for a day. Her determination to hang on to the coins sets her at odds with the whole community in this extraordinarily humorous drama from Yiddish dramatist David Pinski, set in a Russian village in the early 1900s.

It’s always good to dream and hope, but Tille’s dream not only affects her and her family but also the whole village who get caught up in the search for the ‘treasure’. The real treasure is the whole company, at the centre of which is Olivia Bernstone as Tille, along with Fiz Marcus’ interpretation of Jachne-Braine.

Rebecca Brower’s brilliant set design comes into its own as they lift the floor to dig the dirt in a scrabbling, bickering desire that shows how desperate the poor can get when led to believe there is a fortune to be found.

The basic and simple lighting from Isobel Howe effectively contributes to Brower’s believable set. Every scene change goes almost unnoticed as the audience feel involved in the presence of Chone the gravedigger and his family. Finborough have discovered a truly special play and this treasure will shine until 14th November, 2015.

Treasure
By David Pinski
In a new adaptation by Colin Chambers, from a translation by Ludwig Lewisohn.
The UK Premiere
“Oh, it’s a funny sensation, having money in your pocket, I can tell you… Money warms you. If you knew how warm and safe I feel. Like a new creature in a new skin.”

In a production commissioned by the Finborough Theatre, a unique opportunity to see a classic of Yiddish theatre for the first time in the UK – Treasure by David Pinski.

Tille is the poor gravedigger’s daughter, with nothing in the world except a head full of dreams. Things look set to stay that way, until the day her brother returns from the graveyard with a pile of gold coins, and Tille is faced with a choice. She can hand in the money and go back to a life of drudgery, or she can use it to turn the world upside down.

As the village community disintegrates into chaos and descends on the cemetery in search of gold, Tille and her family must use all their wits to stay one step ahead of those who want their share of the treasure.

A timeless fable that digs down into the depths of our folly and greed and, in the midst of the chaos, celebrates one woman’s ingenuity.

Treasure, or Der Oytser, is a comic masterpiece of Yiddish theatre. Written in 1906 and first performed in 1912, it remained popular in the Yiddish repertoire until the 1940s: most notably, Max Reinhardt’s production in Germany in 1919, an English-language version on Broadway in 1920, as well as a production staged in the Vilna Ghetto in 1943.

This isn’t the first production to go down the road of referencing a one-star review of their show (from a different publication, I hasten to add). … END_OF_DOCUMENT_TOKEN_TO_BE_REPLACED

Two sisters reunite after the death of their mother, and secrets pour forth. Robert Holman’s new play gently exhibits talented classical acting in a … END_OF_DOCUMENT_TOKEN_TO_BE_REPLACED

Everyone’s vexed in this show, though some have clearer reasons to be than others. Mrs Driscoll (Tameka Mortimer) is struggling with a home life that … END_OF_DOCUMENT_TOKEN_TO_BE_REPLACED

The penultimate production of the 2021 Tête à Tête Opera Festival, based at London’s Cockpit Theatre and showcasing contemporary and avant-garde new … END_OF_DOCUMENT_TOKEN_TO_BE_REPLACED

Relatively Speaking premiered in 1967 and is the sort of show that is, by contemporary standards, very much of its time, and not just because of … END_OF_DOCUMENT_TOKEN_TO_BE_REPLACED