Earlier this year, drag herstory was made when for the first time, one of the queens in the Drag Race UK “Lip Synch for Your Life” portion of the show, eliminated herself by walking off the main stage. That queen was Ginny Lemon and last night, along with her friends, she opened Tuck Shop West End which has taken up residence at London’s Garrick Theatre for the next two weeks. 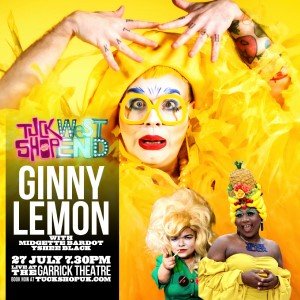 This is a pretty hard review to write as Ginny Lemon & Friends was the first show in the season and so whatever my thoughts, you won’t get a chance to see it. Still, the show sets the style and tone for all that follow, so here goes.

The evening was billed as a night of madness, music, mayhem, and more madness from Drag Race UK’s hilarious Ginny Lemon, and I can’t argue with that. Ginny’s friends were an eclectic bunch to say the least and Yshee Black, Fatt Butcher, Midgitte Bardot, Sharon Legrand and Some Little Cakes ensured that the night really did live up to its publicity. Was everything to my liking? With such a diverse range of performers, covering pretty much every aspect of drag, there were always going to be bits that worked for me and others that didn’t. What I did like was that I was exposed to new queens and styles and certainly had my drag eyes widened. The undoubted highlight of the evening for me, apart from Ginny’s stunning opening number outfit, was Fatt Butcher’s outstanding performance of “Bridge over Troubled Water”. A classic song made more poignant by the sentiments expressed before and after. I also enjoyed Yshee’s dramatic lip-synch to the classic “I’m Not Going” from Dreamgirls. The show ended with Ginny, Yshee, Fatt and Some Little Cakes performing a Ginny classic.

As an opener to a season, Ginny Lemon and Friends wasn’t a bad start, and it was definitely an interesting show. Whilst I love the idea of drag being performed in a mainstream theatre – it’s been too long since Danny La Rue was there – I honestly think that something can get lost. One of the essences of drag is the connection and interaction with the audience. This is easy to do in a small venue, but much more difficult on a West End stage where the audience is used to watching a show in a certain way and can take a while to really get into the vibe of the show.

They may also not be ready for the free-wheeling nature of a drag performance and the flexible interpretation of what is suitable for a 14-year-old. There was also a problem with lighting. Again, drag performers are used to coming right to the front and being close to their audience. Unfortunately, the lighting in the theatre meant the performer’s face would suddenly disappear into shadow as they moved forward.

Producer Christopher D. Clegg has put together a very strong season with performers such as Baga Chipz, Lola Lasange, LoUis CYfer, Cheryl Hole and Holly Stars gracing the Garrick’s stage, and the season ends with Drag Me to the Musicals on the 8th August. Whether you’re a drag superfan or just fancy dipping your big toe into the world, there will be something there for you. Just remember the old adage – expect the unexpected, and you definitely won’t be disappointed.

This isn’t the first production to go down the road of referencing a one-star review of their show (from a different publication, I hasten to add). … END_OF_DOCUMENT_TOKEN_TO_BE_REPLACED

Two sisters reunite after the death of their mother, and secrets pour forth. Robert Holman’s new play gently exhibits talented classical acting in a … END_OF_DOCUMENT_TOKEN_TO_BE_REPLACED

Everyone’s vexed in this show, though some have clearer reasons to be than others. Mrs Driscoll (Tameka Mortimer) is struggling with a home life that … END_OF_DOCUMENT_TOKEN_TO_BE_REPLACED

The penultimate production of the 2021 Tête à Tête Opera Festival, based at London’s Cockpit Theatre and showcasing contemporary and avant-garde new … END_OF_DOCUMENT_TOKEN_TO_BE_REPLACED

Relatively Speaking premiered in 1967 and is the sort of show that is, by contemporary standards, very much of its time, and not just because of … END_OF_DOCUMENT_TOKEN_TO_BE_REPLACED