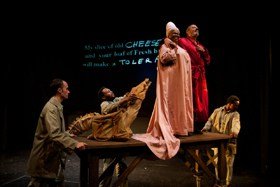 Ubu and the Truth Commission, by William Kentridge, Handspring Puppet Company and Jane Taylor, is on the one hand a barmy piece of contemporary theatre, where the near naked protagonist Ubu converses with three-headed singing dogs and a crocodile-handbag mutation which acts as a paper shredder, and on the other hand a shocking description of the atrocities committed by white authorities and lawmakers during the apartheid in South Africa.

The moulding of the two themes together was in some way an accident, according to director William Kentridge. He was originally trying to set two separate plays, one about King Ubu, the protagonist of Ubu Roi, a nineteenth century absurdist play by Alfred Jarry about greed and the abuse of power. The second was about land-mine victims’ experiences told in a hospital waiting room. Not having time to pen both, he decided to combine the two. Then when the South African Truth and Reconciliation Commission was established two years after the end of apartheid, Kentridge replaced the land-mine victims’ stories with the stories of those who gave evidence at the TRC: the mothers and fathers whose children had been brutally tortured and murdered in the authorities’ crackdown on black resistance. The result is a retelling of these events using puppetry, animation, and real footage.

Pa Ubu and his wife, Ma Ubu, are the central figures, and the only non-puppets in the production. Ubu, whose scheming and immoral nature is portrayed brilliantly by Dawid Minnaar, is a former agent of the state, and represents the horrendous acts perpetrated by them. Throughout much of the play he is clad only in a white vest and briefs, perhaps a testament to how vulnerable he is during the post-apartheid investigation. But when he has successfully evaded justice, he is clad in a fine robe: he has covered up mightily.

Ma Ubu, played by Busi Zokufa is a shrieking housewife who is convinced that her husband’s strange night absences mean that he is sleeping with other women. But when she uncovers the real reason for his nocturnal wanderings and middle of the night showers: the fact he is covering up, and washing off “blood and dynamite” she is paradoxically more ready to forgive him. This is the only aspect of the play I had a difficult time believing or comprehending: I felt that in order to explain her reaction, her character needed to be further developed. Having said that, maybe her character is explained by the fact that she even married this man in the first place. Zokufa however is a talented and versatile actor and puppeteer.

The juxtaposition of the manic, unattractive Ubu with the harrowing, yet composed accounts voiced by the puppets, highlights the dignity and innocence of the victims, and paints Ubu in an even more negative light. By using the puppets, beautifully operated by Gabriel Marchand, Mongi Mthombeni and Mandiseli Maseti of the genius that is Handspring Puppet Company (most famously the creators of War Horse puppetry), Kentridge and Taylor allow the stories to take the focus.

And by using two people to operate the puppets, and a third to translate their story, the producers effectively show how the stories that people told to the Truth Commission were told on behalf of not just themselves, but for all who had suffered. The addition of the heartbreaking real footage of the beatings, shootings, and mass murders, along with the animations of cascading bones and skulls, brings to life these horrendous events.

The fact that all of the actors hail from South Africa lends another credence to the production: it is their history, and its personal nature to them shines through this emotive and enrapturing performance.

With its dark and sardonic wit, Ubu and the Truth Commission combines puppetry, live performance, music, animation and documentary footage. The play draws on both the historical archive of the hearings of South Africa’s Truth and Reconciliation Commission and on Ubu Roi, the licentious buffoon created in 1888 by the youthful French playwright, Alfred Jarry. Pa Ubu represents instruments of Apartheid violence as policemen, assassins, spies and politicians for whom torture, murder, sex and food are all variations of a single gross appetite.

Everyman is one of the earliest printed plays, originally written in Middle English and first performed around 1510. It is a morality play, popular … END_OF_DOCUMENT_TOKEN_TO_BE_REPLACED

After being closed for over two years due to covid, the Arcola Theatre has re-opened with Barney Norris’s love song to the people who raised him, We … END_OF_DOCUMENT_TOKEN_TO_BE_REPLACED

Now in its 15th year, La Clique have firmly established their place on the world burlesque circuit and this year’s London cast bring their infamous … END_OF_DOCUMENT_TOKEN_TO_BE_REPLACED

Warm, funny and lacerating, Satinder Kaur Chohan’s new play opens with a fly-on-the-wall look at the daily attempts women make to be accepted and … END_OF_DOCUMENT_TOKEN_TO_BE_REPLACED