Home » Reviews » Velvet presented by Work.Theatre at The Vault Festival 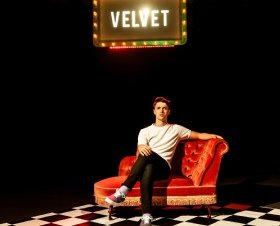 With the recent news of a new play to hit the West End basing its narrative on the Harvey Weinstein scandal, the Vault Festival run of Velvet could not have been better timed. Not that it wasn’t topical anyway, as stories of abuse continue to come to light in various industries, but this story is nonetheless intriguing. A late plot twist was rather predictable but the impact on Tom (Tom Ratcliffe), an actor trying to make his mark on the performing arts world, was remarkably well portrayed in this solo play.

A number of characters are voiced, complete with mannerisms, by Ratcliffe, who puts in a tour de force performance not only as the said actor but as that actor’s mother, brother, agent, friends, acquaintances and a casting director. There’s good use of technology in the show – there’s an exchange of messages with a man who eventually identifies himself as ‘Daniel’, who has contacted Tom on Grindr. Their messages are on view on a large screen, with the added bonus of a voiceover for Daniel, and Tom’s responses spoken out loud, providing the audience with the intonations of emotions of what is being said, so often liable to misinterpretation when merely typed in the heat of the moment.

That, perhaps, is one of the points the play wishes to make: Tom does, the audience discovers sooner or later, misunderstand what his online contact is trying to achieve, with significantly negative consequences. I wasn’t sure what to make of Tom as a character – articulate and intelligent, he gets sucked into the charms of a supposedly big name in the entertainment industry, whose identity remains concealed to the end. But when civility gives way to outright rudeness (on Daniel’s part) Tom still continues the conversation. I suppose it is indicative of the law of supply and demand – there is a lot of acting talent out there, and only so many roles being cast at any one time. The longer the conversation goes on, the greater the likelihood Tom will do what is being asked of him – which is, to put it mildly, morally dubious. And all for a film audition.

The play also reveals some of the harsh realities of what it is to be a jobbing actor. Tom also finds himself dealing with an unreasonable agent (there are, I hasten to add, many good ones out there), and an unsteady income. For various reasons his relationship with partner Matthew doesn’t last the course, and, having left his home town for the big lights of the capital, he finds himself back there, with the inevitable ribbing from friends and former classmates.

The only thing on stage apart from Tom and the screen is a chaise longue. Some lighting effects help to distinguish one scene from another, but the play is otherwise heavily reliant on the monologue to maintain interest. Tom, vulnerable and alone, stands against the force of an industry still too exploitative and dishonest. An intriguing production with plenty of food for thought.

VELVET presented by Work.Theatre
The Vault Festival, 30 January to 3 February 2019
Tom has always dreamt of being a successful actor; and now, after years of disappointment, he is
finally presented with his golden opportunity…

And an impossible decision to make.
Set amongst the 2017 #MeToo movement, VELVET explores the complex realities of harassment
within the industry and how far a person is willing to go in order to achieve their dreams. But with
most riding the wave of change, will Tom’s opportunity slip through his fingers?
Tom Ratcliffe: Writer and Actor
Andrew Twyman: Director
Jenna Fincken, Co-producer
Jack Weir: Lighting Designer
Callum Wyles: Sound Designer

The pairing of work by Bob Dylan and Leonard Cohen in a single recital is a logical move. Though the latter died five years ago, his and his old … END_OF_DOCUMENT_TOKEN_TO_BE_REPLACED

If the dialogue wasn’t quite so eclectic and engaging, I might have decided to attempt to have kept a tally of how many times a trestle table is … END_OF_DOCUMENT_TOKEN_TO_BE_REPLACED

Doctor Who: Time Fracture by Immersive Everywhere has plenty to exhilarate both avid and casual Doctor Who fans, delivering on its promise to let … END_OF_DOCUMENT_TOKEN_TO_BE_REPLACED

A brief review of a brief play. It is, as the Prime Minister (Lisa Day) observes, extremely unlikely that her ‘letter of last resort’ would ever … END_OF_DOCUMENT_TOKEN_TO_BE_REPLACED

It’s a production of Hamlet that starts at 7:30pm and manages to come down on the ‘right’ side of 10:30pm - the hardcore fans and followers of … END_OF_DOCUMENT_TOKEN_TO_BE_REPLACED