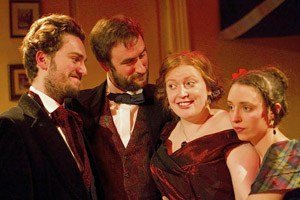 The Christmas Song (Chestnuts Roasting On An Open Fire) was a song written in the height of summer 1945. Seventy summers later, this show, Victorian & Gay, was conceived: both are, in the clipped tones of the show’s characters, ‘eb-suey-mar-vus’ (absolutely marvellous).

One of those raucous shows that is beyond ridiculous but knows it and revels in it, the party starts before the house opens, with handshakes and introductions made in the pub below. In full period costume, the ladies of the cast in hooped skirts were subjected to the unadulterated jesting of the Islington locals in the pub crowd. I am making it sound rather unpleasant and threatening: I assure readers that it was merely teasing, and made – and taken – with complimentary intentions.

There’s a lot packed into this production, and with its no-holds-barred themes, it isn’t exactly family viewing. I’m loath to give too much away, though the characters will no doubt want to jump up and down and eyeball me, shouting, “Do tell! Do tell!” but I’ve made, together with several others, a London stage debut myself in this show. Or did I? There wasn’t a fourth wall to begin with, with enthusiastic welcomes from the company as we filed in, and the exchanges with members of the audience barely let up throughout. Either way, I should point out that if you’re meek and modest rather than bold and brash, don’t fear. The participatory bits are all very small, and if you’ve a cataract in your right eye which wouldn’t be taken out for another six weeks, so you can’t read a faint script very well (ahem), the company is on hand to very kindly assist.

The show cannot, unlike so many other shows that pop up at this time of year, pantomimes included, be accused of neglecting the traditional Christmas story, which is treated, surprisingly for an almost relentlessly witty and self-teasing production, with warmth and tact. I doubt even Mary Whitehouse would have very much to rant about, at least with regard to this particular aspect of the evening’s proceedings – she’d have been pleased that Father Christmas is given short shrift.

A lot of the many characters are so hammed up they become quite absurd, in a hysterical way. It works, though, as this most festive and pleasurable show brims with enthusiasm and vigour. Lottie Davies was impressive as surly cook Mrs Winterbottom, the sole antithesis to the other highly jolly characters, and Steffi Walker stops the show with a number inspired by Wuthering Heights. There are same-sex relationships going on in the show, but the emphasis is very much on the Victorian definition of ‘gay’ – light-hearted and carefree is an apt description here. I don’t ordinarily care much for immersive theatre – I usually like to be left alone and let the professional actors get on with it – but I loved this experience. “Ho-ho-hosanna in excelsis” indeed.

It’s usually the case in theatres above pubs that the noise from the banter downstairs creeps into the room upstairs. I don’t think I’ve ever come across a situation where the opposite was the case. Until I came out of Victorian & Gay. I am reliably informed that the audience’s laughter was loud enough that some of the punters in the bar wondered what they were missing out on. Don’t be one of them: join the party, and be assured of a Merry Christmas. “Good tidings and gin”? I’ll drink to that.

Victorian and Gay
Who doesn’t love a Victorian Christmas? Charles Dickens, Mrs Beeton, and Queen Victoria come to life in this frivolously festive evening. Inspired by Horrible Histories, but with drinking and naughtiness encouraged, award-winning Another Soup invite you to a truly immersive, no-holds-barred seasonal celebration, for adult eyes only. Who knows who’ll be kissed under the mistletoe?

Winners of DarkChat’s Best Play 2014, and shortlisted for a Musical Theatre Network Award, Another Soup are back this December to offer you an evening of festive fondlings and Christmas capers. Brace yourself for a full stocking of irreverent mayhem, lewd caroling, and bawdy bacchanalia in this new piece of Christmas ridiculousness.

Lady Griselda and Lady Ermintrude may be rushing headlong towards scandal, but they still throw one hell of a festive knees-up. They invite you to join them in their parlour for an evening of Yuletide abandon – along with a rogue American, who’s a bit of a pianist; an English gent of ‘eccentric’ tastes; and a serving woman from the colonies… well, Wales. Revel in a right old sing-song and a touch of sordid Saturnalia, as these miscreants tell the greatest story ever told, in their eyes at least.

The London Philharmonic Orchestra, under its chief conductor Edward Gardner, opened its 2022-23 season at the Royal Festival Hall with a thrilling … END_OF_DOCUMENT_TOKEN_TO_BE_REPLACED

The last in the Sherlock Holmes novel, The Valley of Fear, is adapted in an ambitious production - the general reaction immediately after the show … END_OF_DOCUMENT_TOKEN_TO_BE_REPLACED

The stage location of this urgent and eccentric play from the production company Fuel is nothing if not dramatic. Here we are in the riverfront … END_OF_DOCUMENT_TOKEN_TO_BE_REPLACED

The blurb for Lullaby of Scavengers didn’t really prepare me for the show, sure it mentioned that there may be some explicit content and there was … END_OF_DOCUMENT_TOKEN_TO_BE_REPLACED

There are certain chart music tunes that stick in the mind, such as ‘Bad Romance’ by Lady Gaga or ‘Bohemian Rhapsody’ by Queen. Do they count as … END_OF_DOCUMENT_TOKEN_TO_BE_REPLACED