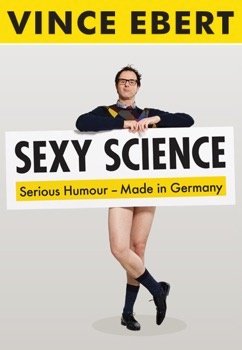 There’s no point gracing the Edinburgh Fringe with one’s presence without being open-minded, but a German comedian? By Vince Ebert’s own admission, it is, at face value, a contradiction in terms – the exact words used were “like an English cook” – which would have gone down well with the locals in the audience had he not immediately followed it with “or a sober Scotsman”. The preamble was a little longer than I expected it to be, but then having explained how he ended up a ‘certified physicist’, he also talks about why he’s called his show Sexy Science. Made in Germany. The second bit is easy: he’s from Germany. Elaborating on the first bit is a little more complex; except it isn’t.

Ebert breaks down science to its bare essentials – it is, he beams, all about testing assumptions. Like peeing on an electric fence to prove or disprove Ohm’s law. Or taking a canary out into a thunderstorm to test whether Faraday was right.

This is, he says, his first run of this show in the English language, which precipitates some asides about differences between Germany and the UK. They are not all breaks from the science of the show, and Ebert never strays too far from his chosen specialist subject. Ever heard of the Flachspüler? For the uninitiated, like me, it is a German toilet design that has number twos falling onto a shelf or plate type section. The idea is that there is no risk of a splashback from the ‘plop’ from UK toilets, however, it is almost always necessary to use the toilet brush afterwards to make sure the so-called shelf is spotless.

And then there’s ‘Reiseversicherungen’, or travel insurance, which is apparently on a different level to what passes for travel insurance in the UK. Not that I had any reason to doubt anything that Ebert said – a good scientist always backs up what he says with evidence – but I did that thing of looking up ‘German travel insurance’ after the show. The options available are indeed remarkable – one says “holiday souvenirs purchased in the US are often so valuable that you should insure their transportation” which seems quite ridiculous to me, but there it is.

We shouldn’t (and don’t) believe everything the doom-mongers say. Still, it is reassuring to know, from a practising scientist, that artificial intelligence is not going to result in disastrous consequences. Human brains, as well as the brains of those in the animal kingdom, are capable of things that machines will never be, because, as Ebert puts it, “computers calculate, brains comprehend”. Ebert’s mind certainly thinks very logically – he could not, for instance, understand why there was a note (in German, of course) included with his new mobile telephone saying words to the effect of “if your phone breaks, call us”.

What does he think about astrology? He doesn’t believe in it, “because I’m a very sceptical person. Which is typical for a Scorpio.” Ebert has a steady and assured delivery style, and unpacks a considerable amount of science in the purest comedy form – the power of words alone, without a single prop, PowerPoint slide, video projection, sound effect or the need to bring a member of the audience up on stage to demonstrate something. It’s that combination of being both educational and entertaining that makes Ebert’s show worth seeing.

German comedians are like English cooks, sober Scotsmen or Texan Democrats. And physicists aren’t funny at all. That may be true until you meet the father of German science comedy. Vince Ebert explains scientific facts using the fundamental laws of humour. Why is the sky blue? Why is the night black? Why shouldn’t we eat yellow snow? A witty and inspiring performance about skeptical thinking, fake news, the secret of German cars and the important question: do strippers in the southern hemisphere turn around the pole in the opposite direction?

I don’t watch a lot of television but even I have some familiarity with the Up documentary film series, following the lives of fourteen people (it’s … END_OF_DOCUMENT_TOKEN_TO_BE_REPLACED

DRIVE THRU by Blink Dance Theatre is an immersive, multi-sensory dance theatre show, onboard a minibus. What’s not to like? Written, … END_OF_DOCUMENT_TOKEN_TO_BE_REPLACED

I am slightly confused as I walk up the hill to Racks Close, I can hear German 1930s music playing, I thought it was As You Like It tonight, not … END_OF_DOCUMENT_TOKEN_TO_BE_REPLACED

A couple of weeks ago I interviewed the creatives behind Chewboy Productions. As part of the interview, they were telling me about the new show they … END_OF_DOCUMENT_TOKEN_TO_BE_REPLACED