You are here: Home / Reviews / Voices From Home at the Old Red Lion Theatre | Review 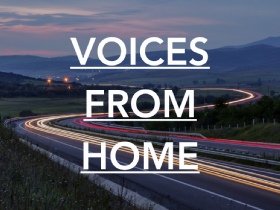 It is advantageous, or so I had it drilled into me at business school, to find a unique selling point, or a niche market. Offer something that few, if any, others are offering – so long, of course, as it is of good quality and of practical use: it’s no surprise, for instance, that a social network ‘for imaginary friends’ didn’t last. With various international live performance festivals, all of whom are welcome in the capital, showcasing work from around the world, here comes Voices From Home, putting on short plays from the Home Counties and East Anglia: that is, not London.

Further, all the writers are women, as are all the actors. In ‘M** & Women’ by Sydney Stevenson lies the most explicitly feminist storyline. Just weeks after the Wellcome Collection came under severe criticism for using the term ‘womxn’, in a move to champion inclusivity that backfired, the term ‘m**’ is perhaps equally ridiculous. 1 (Melissa Parker) and 2 (Eleanor Grace) – are guarding one of the very few members of a critically endangered species in a future world. It’s not made absolutely clear quite how men were more or less obliterated, only that both of the on-stage characters have fathers, brothers and male friends who are all sadly missed. There are other consequences, too: again, for ambiguous reasons, both the retailers Primark and Marks & Spencer are no more. It is nonetheless an interesting proposition, and the play suggests that a world in which the patriarchy was replaced by the matriarchy would still involve human beings with frailties and fallibilities in power – we’re not that much different in the end.

‘Sungrazer’ by Clare Reddaway considers an ever-increasingly pertinent topic, the environment. Inga (Emma Howarth) is looking out for ‘the comet of the century’, set to hurtle down to Planet Earth at any given moment. Annika (Eleanor Crosswell), her sister, behaves very differently, as some siblings tend to do, and it’s made clear they would have nothing to do with each other but for the fact, they are related. Annika works for a nuclear power station, presumably a major employer in the region, but reconsiders her choice of career after a major incident at the plant. Some underlying humour – and passive-aggressiveness – continually permeate through the dialogue.

‘Flying Ant Day’ by Jo Gatford is the most distinctive play in this collection, and the one that I would most like to see develop into a full-length production. There aren’t too many plays out there that consider what it is like for mothers of young dependents like Alice (Jennifer Oliver) who must keep on top of everything one way or another. Done well, as it is here, it can be quite a fascinating subject matter, looking at the physical and psychological impact of sleep deprivation, fatigue and the need to keep going. Alice feels her friend Karen (Emmie Spencer) has a relatively easy ride, despite having more children than she does. Perhaps because of the play’s current brevity, the role of Karen is somewhat underdeveloped, and a lengthier script might well reveal that the grass isn’t really all that greener on the other side after all.

‘The Cromer Special’ by Emma Zadow begins with intrigue. Wizzard’s ‘I Wish It Could Be Christmas Everyday’ is playing. But why are Maggie (Claudia Campbell) and Lucy (Abbi Douetil) so glum, humbug personified? If, in the words of the song, there are reasons to be cheerful, there are just as many reasons not to be, and a fish and chip shop open on Christmas Day, especially one that has now run out of fish, is on balance reason enough to not be bouncing around the place. It’s a witty play with a lot packed into it. Lucy is a student at the University of East Anglia, but gaining a degree is seen as superfluous by the likes of Maggie, one of those self-spoken graduates from the University of Life. But they find common ground again when they finally get a customer.

‘Home Time’ by Olivia Rosenthall, the sole monologue play, is about a train journey. Isobel Eadie spins a rather uncomfortable narrative about an evening commute (hence the play’s title), with all the jostling for space and the other energy-sapping elements of railway travel. During the journey, there is some time for the character to reflect, for her thoughts to wander. A reflective play, despite the frantic backdrop.

A pleasant and varied evening overall. None of the plays were difficult to follow, and all of the performances were engaging and convincing. And while a one-act production is something of a reviewer’s delight (it means an earlier Tube home), there could have been a couple of additional short plays included in this collection. Then again, less can sometimes be more…