At surface level, this production involves clowning around while tackling some pertinent and contemporary issues in society at large. It runs to sixty minutes officially, though there is some interaction (not, I hasten to add, the same as participation) even before the show proper begins. The audience is told, in no uncertain times, that this is to be a “serious play”, and in some respects, it is: few things are more serious than people’s futures hanging in the balance, thanks to the various hoops and hurdles, both physical and metaphorical, that the immigrant characters must negotiate. 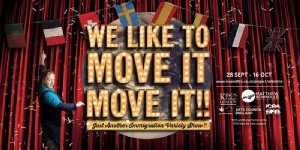 Truth be told, there are worse examples than the ones served up in this rapidly-paced show, which liberally indulges in absurdism: nobody is quite sure how a Peruvian man ends up talking to his dead grandmother in what is not (or so the audience is led to believe) any kind of dream or hallucinatory experience. The native languages of the cast (all first-generation immigrants) are woven into the narrative, and as each of the four actors takes on multiple characters, there’s some fun to be had as the limitations of having a maximum of four on-stage characters are dealt with deftly, even if the device of X looking for Y but not being able to find Y because the same person is playing both X and Y is too heavily relied on.

Some unusual techniques are deployed in the production to make certain points, but the result is surprisingly not discordant, perhaps because the analogies within the plotlines are more logical than the plotlines themselves. Lack of congruence does not always result from the play’s absurdist tendencies, however: an ongoing subplot about the ‘Life in the UK’ test for British citizenship, for instance, is both hilarious and very, very true.

The production team’s work with Dr Sarah Fine, a senior lecturer in philosophy at King’s College London who specialises in political philosophy, has led to challenging questions being raised in the show, in a distinctly friendly and non-confrontational manner. Based on real-life accounts of immigrant experiences, the show does not offer any solutions to the problems it presents, which means that one reaches the end of the show knowing what it is against but wanting to know more about what it is for. That said, it is implied that the show would like the immigration policies and procedures to be revised – the Government’s beloved citizenship test has questions about Stonehenge, the Proms, and whether the Channel Islands are technically part of the UK, but does knowledge of such matters really prove one is a worthy citizen?

Hints of the Windrush scandal manifest themselves with the appearance of an older Caribbean lady who expresses dissatisfaction with a play within the play, in which a large Union flag is on display in the front room of a British townhouse and its occupants are sat in polite conversation drinking tea. The reaction from her, and from others, is one of bemusement and bewilderment: where is the drama? Why are there no raised voices? How can watching people sat down being civilised to one another make for good theatre?

Asking about relatively trivial matters gives variation to the show, which would otherwise run the risk of being a difficult and uncomfortable watch from start to finish. As it is, one would have to have a heart of stone not to be humoured by this chaotic but likeable production.

How do you solve a problem like immigration? Karaoke, philosophy and border controls come together in an all-immigrant comedy, variety show! What is behind our collective acceptance of immigration control? What does it say about us and what do those who have come to the UK from somewhere else want to say about it? ice&fire theatre and Matthew Schmolle productions (in collaboration with the Philosophy Department at King’s College London) invite you to join the (very jolly) conversation. Directed by Olivier award-winner Donnacadh O’Briain.

Nikhil Parmar’s one-man show, originally written as a TV pilot, manages to touch on a wide range of themes from Islamophobia to modern fatherhood with … END_OF_DOCUMENT_TOKEN_TO_BE_REPLACED

Handel’s 1738 opera Serse (or Xerxes) is an exploration of power, love and human frailty. King Serse falls in love with the voice of his brother … END_OF_DOCUMENT_TOKEN_TO_BE_REPLACED

Lea Salonga has her fans. She also has some superfans, the ones who yell, “I love you Lea!” at almost every opportunity. If that wasn’t enough, there … END_OF_DOCUMENT_TOKEN_TO_BE_REPLACED

I have no hesitation in saying that the 1952 movie “Singin’ in the Rain” and its 1985 stage version is one of the greatest musicals of all time, … END_OF_DOCUMENT_TOKEN_TO_BE_REPLACED

There are, Maria Caruso was keen to emphasise in a post-show discussion, no wrong answers when it comes to responding to Metamorphosis or even … END_OF_DOCUMENT_TOKEN_TO_BE_REPLACED