Winter Gardens in Blackpool is certainly a versatile venue – BBC Television’s Strictly Come Dancing, usually filmed at Elstree Studios, goes up to Blackpool for an episode each year (except, of course, when there’s a global pandemic going on), and it is the host venue of the Blackpool Dance Festival and the World Matchplay darts tournament. Previously home to various political party conferences, which now largely take place in even larger venues, the venue continues to move with the times: it is, at the time of writing, a Covid-19 vaccination centre. 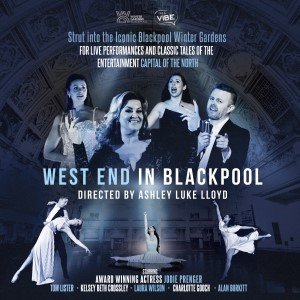 Further particulars on the venue are supplied in this short but sweet production, largely by Kelsey-Beth Crossley (who has the unfortunate privilege of being scripted a faux pas, with a reference to a visit to Winter Gardens from somebody apparently called ‘Her Royal Highness The Queen’), and in just under thirty minutes the audience is treated to a range of tunes from the venue’s illustrious history. Not all of them are, strictly speaking, from musical theatre, despite the production’s title: the 1930s jazz standard ‘All of Me’, sung by Tom Lister, is reminiscent of Frank Sinatra’s visits to Blackpool, and Crossley’s rendering of ‘Where Do I Begin?’, from the motion picture Love Story, was brought to Blackpool by Dame Shirley Bassey.

Some stylish choreography is to be enjoyed here – just as I mused that the show could do with a bit more of it, patience was rewarded with a showstopping version of ‘There’s No Business Like Show Business’ from the Irving Berlin musical Annie Get Your Gun. Laura Wilson stamps her own authority on what has become both a pop classic and a musical theatre standard, ‘The Winner Takes It All’ from Mamma Mia! – a previous touring production, we are told, broke Winter Gardens box office records, and according to the venue’s website, the show returns there in 2023.

There is a flair and energy about this production, which celebrates an iconic venue as much as it does the music that has been performed there. In some ways, it is rather sad to see a building that was designed to be teeming with crowds standing empty. In other ways, this production gives viewers an opportunity to appreciate the architecture of the venue in a way that wouldn’t ordinarily happen. Informative and entertaining, it’s a half-hour well spent.

Blackpool is the birthplace of the ‘Great British Summer’ – built on the foundations of its elite entertainment history. Join us as we explore the grand stages walked by legends Frank Sinatra and Judy Garland at this iconic British landmark and lose yourself in the thrilling performances from homegrown talent that link the West End to the Winter Gardens Blackpool.

Strut down the opulent staircases and prepare to be immersed and moved by each world-class performance which will leave you feeling exhilarated and reminded of how the theatrical experience can whisk you off to another world.

It’s an intricate plot, laced with some subversive humour - that the female character is simply called ‘The Woman’ (Molly Lynch), for instance, is … END_OF_DOCUMENT_TOKEN_TO_BE_REPLACED

Andrea McArdle didn’t, when the 1978 movie Rainbow was released, look or sound like Judy Garland, and she still doesn’t. You’d be forgiven for … END_OF_DOCUMENT_TOKEN_TO_BE_REPLACED

TENNIS ELBOW is the first play that John Byrne has written for thirteen years, and is in fact a companion piece to his critically successful Writer’s … END_OF_DOCUMENT_TOKEN_TO_BE_REPLACED

It’s all a bit banal, really - or perhaps I’m too heavily influenced by some of the other online productions that I’ve seen recently, which deal with … END_OF_DOCUMENT_TOKEN_TO_BE_REPLACED

Mandy Gonzalez is one of those Broadway actresses with a number of dedicated fans and followers, and it’s easy to see why given her sunny disposition … END_OF_DOCUMENT_TOKEN_TO_BE_REPLACED