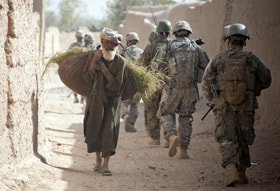 For the retelling of one of the greatest epics known to man, the theatre at Acklam Market is not an obvious choice. The rough space under a bridge, with its metal scaffolding and unforgiving acoustics, looks rather less than epic at first glance. But as the play starts, it quickly becomes clear that this is the perfect setting for a tale that tells of the inner ruins of a man scarred by war.

When Nobody Returns is a collaboration between London-based theatre company Border Crossings and the Palestinian ASHTAR Theatre, reimagining the classic story of Odysseus’ ten-year journey back to Ithaka after the war in Troy – except here, the action starts near the end of the journey, and Odysseus has not been very keen on coming home.

While on the slanted slabs of concrete on either side of the stage the young Telémakhos is told first by his mother Penelope and then by king Menelaus that his father is a hero, in the middle we see Odysseus betraying his wife with the beautiful Calypso. She tries to convince him to forget his worries, but it soon becomes clear that his memories haunt Odysseus, and they are exactly what have kept him from going home all this time.

The adventures of Odysseus’ ten-year wanderings, which make up the bulk of the original Odyssey, become rumours that Menelaus recounts to Telémakhos: how his father was seduced by the sorceress Circe; his visit to the Lotus-eaters; and the episode with the one-eyed giant Polyphemus, which the fat king painstakingly makes the young man reenact. ‘It’s just a story,’ Menelaus tells an increasingly confused Telémakhos.

The stories that people tell, and how different they may be from reality, are a leading theme of the play. The image of the cunning hero Odysseus that Penelope holds up to her son; the wild tales of Odysseus’ misfortunes Menelaus tells; and the story that Odysseus has convinced himself of, that it is better for his family if he does not to go home: they all serve to help the characters to avoid the one theme that is too painful to talk about, the horrors and losses of war.

But the threat of war is never far away, and the constant suggestions of violence by Penelope’s suitors make for chilling moments in the play. One of the most poignant scenes is a Kafka-esque interaction set in a small room, recognisably laid out as a modern-day border control office. Penelope asks for permission to go to the seaside; the suitors’ threatening demeanor, and their absurd insistence that they are only trying to keep her safe, clearly draw directly on the Palestinian actors’ experiences with Israeli settlers.

The play briefly loses intensity in a scene where Odysseus listens to the voices of his lover and his mother in his head as he decides to go home, but this is only one small slip-up in an otherwise excellent production. With impressive performances and an ingeniously used set design, When Nobody Returns is a sharp and tragic look at the damage that war does, not only to the soldier but to his family as well. It touches on the heart of today’s conflicts – and it will not fail to touch the heart of anyone who watches them from near or far.

London-based theatre company Border Crossings in collaboration with Ramallah-based ASHTAR Theatre of Palestine will present two plays set in the Middle East, plunging the audience into the heart of conflict and occupation directly underneath the Westway

This Flesh is Mine, which premiered in 2014 will run alongside the world premiere of its sequel When Nobody Returns featuring a joint cast of Palestinian and British actors

This Flesh is Mine is Brian Woolland’s acclaimed poetic play, drawn from The Iliad, that brings together Homer’s Troy and the contemporary life and politics of the Middle East of today. Its sequel, When Nobody Returns, is an Odyssey to follow; it continues to meld the Mediterranean worlds of Homeric myth and the present day. After the war is over there are displaced people on the seas, soldiers carrying mental scars, and long-remembered scores that need to be settled. Alongside recurrent themes of war, death, honour and reconciliation both plays engage profoundly with the current refugee crisis: there will be a series of talks throughout the run with special guests to discuss the issues raised in the productions.

Everyman is one of the earliest printed plays, originally written in Middle English and first performed around 1510. It is a morality play, popular … END_OF_DOCUMENT_TOKEN_TO_BE_REPLACED

After being closed for over two years due to covid, the Arcola Theatre has re-opened with Barney Norris’s love song to the people who raised him, We … END_OF_DOCUMENT_TOKEN_TO_BE_REPLACED

Now in its 15th year, La Clique have firmly established their place on the world burlesque circuit and this year’s London cast bring their infamous … END_OF_DOCUMENT_TOKEN_TO_BE_REPLACED

Warm, funny and lacerating, Satinder Kaur Chohan’s new play opens with a fly-on-the-wall look at the daily attempts women make to be accepted and … END_OF_DOCUMENT_TOKEN_TO_BE_REPLACED