Home » Theatre News » Where The Hell Is Bernard? at The Space 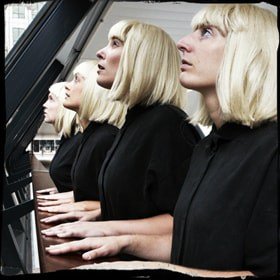 The innovative Haste Theatre is fast developing a reputation for entertaining audiences with drama that involves dance, music and physical theatre but is also thought-provoking. Where the hell is Bernard?, in the great Space Theatre near Canary Wharf in East London, is their latest and once again it does not disappoint. Just because it is Orwellian does not mean it should be dismissed as old hat. In fact the hat motif – used in a brilliant new way – is central to the personification of the disappeared Bernard.

The play is set in a dystopian future, the characters walled into ‘The Vine’, a city beyond which we suspect there might still be more normal life. Elly Beaman Brinklow, Valeria Compagnoni, Jesse Dupré and Sophie Taylor play the four doll-like blond clones who work in a lost property office.

Over the tannoy come regular announcements of the latest ‘elder liquidations’, of the ‘vortex’ of wisdom, productivity and purification. Turning back is not allowed because that delays the optimism of the future. On their 80th birthdays, people are ‘expired’ into the life of the ‘idea’.

The blond girls, who robotically practise their training in shaking hands to comic effect, manage to restore items of lost property to their owners by semi-psychic imaginings.

This represents possible future of an AI, the voice coming over the tannoy, combined with an ‘Internet of Things’. But when a box of Bernard Freemont’s things arrive, and it transpires that Bernard actually disappeared 43 years ago, they leave their sky-high office to descend to the streets and try to find him. In their journeys, they discover a subversive book of real and beautiful poetry, and see for the first time the gorgeous colours and life of a forest. They also witness the terrifying execution of a confused and frightened woman on her 80th birthday.

I saw this play in a fortnight when I spent some considerable time in TFL’s lost property office in Baker Street, and also when I wrote a news story about the rocketing rates of euthanasia in Belgium, up by 40 per cent in four years.

This play is of course not necessarily where we are headed, but it represents a voice that needs to be heard in the current clamour of ideas and idealism.

None of the doll girls had mobile devices. Everything seemed to happen in their heads, or in the environment around them.

The writing was clear, from a great idea, with potential still for development in the dynamics of the dialogue.

Once again, Haste have produced a simply stunning set design – beautifully made of light and translucency, seemingly within the visually pleasing principles of the golden ‘rule of three’. In addition the movement was extremely watchable with intelligent choreography. Their electric blond hair flew around, each strand catching the light, defying the lies, provoking and leading the girls towards the truth.

In a world where no one plays, no one questions and no one ever leaves.
4 women work in an office high above the city to anonymously return lost items. All runs like clockwork until one day a box mysteriously bounces back…
As the women embark on a mission that takes them out of the city and out of their comfort zones, they unwittingly find themselves with the future of humanity in their hands.

Haste shares a passion for innovative, creative and multidisciplinary storytelling. They have been chosen for the New Diorama/Ideas Tap Emerging Artist Graduate Programme and showcase.

Titus Andronicus is not usually a comedy, it is usually a bloody, villainous and vengeful tale, but tonight it is a comedy and a rather amusing one at … END_OF_DOCUMENT_TOKEN_TO_BE_REPLACED

This show is not without clichés - there are three of note in this production. Firstly, the French horn of the show’s title is personified, speaking … END_OF_DOCUMENT_TOKEN_TO_BE_REPLACED

There’s very little in the way of set in this show: aside from chairs, a few crash barriers and at one point, a red carpet, the actors’ movements … END_OF_DOCUMENT_TOKEN_TO_BE_REPLACED

South African born, but raised on the Isle of Man, Pierre Novellie is a true raconteur rather than just another 'stand-up' comedian. He says about his … END_OF_DOCUMENT_TOKEN_TO_BE_REPLACED

This show, Willy Hudson began by saying, is about himself. It is written by himself, is directed by himself and executive produced by himself. Almost … END_OF_DOCUMENT_TOKEN_TO_BE_REPLACED