Home » Reviews » Wil Greenway: The Ocean After All at Underbelly Bristo Square (EdFringe) 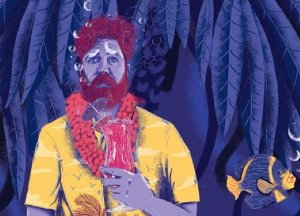 When you’re accosted by a burley Aussie with a great big bushy ginger full-kanga (thats Oz for beard for the uninitiated) who grabs you by the lapel and forces a flyer into your hand and threatens to sing all 8 verses (inc choruses) of Waltzing Matilda you kinda feel obliged to agree to go to his show. “Is it funny?” I ask rather timidly. “Yes, in parts”, he answers which turns out to be a refreshingly honest appraisal. I could, of course, have taken his postcard and disappeared without trace into the depths of Flyer City not giving a backward glance and deposited the publicity material into one of the over-flowing recycling receptacles. But I didn’t. And I’m rather glad I didn’t.

Wil Greenway’s very personal solo Aussie folk saga is delightfully performed and touchingly authentic. Having driven his little blue car off a pier into a fishing boat Wil is whisked away to become a castaway on a desert Island.

And a message in a bottle comes into it somehow. There’s obviously more to it than that but I’m not about to stray into spoiler mode. It’s poetic. And the poetry is in the compelling narrative, the downbeat humour, the floridly descriptive language and the tragedy that seeps unapologetically from Greenwood’s eyes as he recounts his life-changing mini-epic. Greenwood clearly has a way with words and a way with emotions and he sucks us in, tells us everything’s going to be all right and then shows us why it’s not. Yes, it is funny in parts and although there is a very serious edge to his story, it is charming, and engrossing and ultimately a very satisfying piece of theatre.

Having jumped up like a swagman on me outside the venue he seemed genuinely pleased to see me waiting in line for the show and thanked me for turning up. I’m very glad I did. And he needn’t have worried as the place was nearly full. But that personal touch is his USP which effortlessly translates from the street to the stage and we feel that we are all personally involved with his tale. And that’s exactly where he wants us to be.

Highly recommended: I guarantee you’ll be touched by his gentle wit and enthralling persona.

You never know what’ll change your life. The message in the bottle that bobbed up before you at the beach. That’s what brought you here. Sold-out four years and running, master storyteller and cult classic of the Fringe, Wil, returns with a brand-new show to whisk you away to some other place. ‘I’m on record as being a fan’ (Daniel Kitson). Best Storytelling Comedy Act at the What’s On London Comedy Awards.

This isn’t the first production to go down the road of referencing a one-star review of their show (from a different publication, I hasten to add). … END_OF_DOCUMENT_TOKEN_TO_BE_REPLACED

Two sisters reunite after the death of their mother, and secrets pour forth. Robert Holman’s new play gently exhibits talented classical acting in a … END_OF_DOCUMENT_TOKEN_TO_BE_REPLACED

Everyone’s vexed in this show, though some have clearer reasons to be than others. Mrs Driscoll (Tameka Mortimer) is struggling with a home life that … END_OF_DOCUMENT_TOKEN_TO_BE_REPLACED

The penultimate production of the 2021 Tête à Tête Opera Festival, based at London’s Cockpit Theatre and showcasing contemporary and avant-garde new … END_OF_DOCUMENT_TOKEN_TO_BE_REPLACED

Relatively Speaking premiered in 1967 and is the sort of show that is, by contemporary standards, very much of its time, and not just because of … END_OF_DOCUMENT_TOKEN_TO_BE_REPLACED