[Trigger warning: date rape and miscarriage]
Nothing could have prepared the audience for the intense, deeply personal and at times humourous tale (partly inspired by true events) of Wonder in Aliceland. Told in 3 scenes, the play explores human relationships and exposes society’s stereotypes, written and performed by Alice Henley, starring Zahra Browne and directed by James Wren. 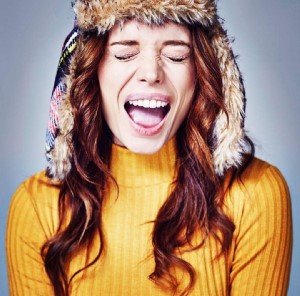 The lights dim, and Lizzo’s “Truth Hurts” plays as the stage is set fading out on the lyrics “Why men great till they gotta be great”, which becomes a recurring theme. We are introduced to Alice and her roommate conversing about the perils of dating in London, with the scene quickly evolving into her roommate (Browne) divulging her experience of date rape that happened a few weeks prior. Henley’s writing here is superb, you could very easily believe she had transcribed this conversation word for word from real-world experience. The deeply dark subject matter entwined with delicate humour made the audience titter, in some cases laugh out loud. Henley’s colloquial, blunt addressing of the issue successfully made the audience shift in their seats with discomfort, coupled with both actors’ stellar performances really pushed the idea home that this could very easily happen to you or someone you know.

Commendation to both Henley and Browne for highly effective delivery of a gritty, gut-wrenching scene that highlighted the important conversations that need to be had, and the prejudices towards women in today’s
highly judgmental society.

The second scene began with Henley waiting in a doctor’s office as she recounts her experience of suffering a miscarriage. The monologue describes in detail the trauma, loneliness and emptiness felt as she navigates the many obstacles that can face a woman in her 30s when she wants to start a family without the luxury of time and the harsh reality of having to endure it alone. The direction by Wren was subtle and superbly handled. Henley’s gestures and delivery truly conveyed her stress and anxiety, convincing the audience of her pain. Again, Henley’s writing here is powerfully raw and honest, at one point moving several of the audience to tears with a performance that left a lump-in-throat feeling that didn’t shift throughout the rest of the show. It was wonderfully refreshing to witness a woman’s experience, one that has clearly been shared by so many other women and that hasn’t been told enough, especially in mainstream media. The most impactful scene of the play, as you can clearly feel Henley sharing her personal experience.

For the third scene, Alice is on her final round of IVF and visits her friend Kate (Browne) for support only to discover that Kate’s 17-year-old daughter has been missing since the previous evening. Understandably worried, Kate’s imagination leaps from one worst-case scenario to the next with Alice trying desperately to calm her friend down. Browne’s pacing around the room, running fingers through her hair and conversation growing louder by the second truly made the audience feel on edge and like we were in the room with them – a fantastic performance and
again excellent direction by Wren here. This scene had the most humour; the banter between the characters was playful yet always with an underlying sense of panic which kept the audience on their toes. Wren’s direction in the previous two scenes worked well to successfully create tension and understanding that something bad was coming, the pace increasing further here until the climax at the end. Of all the scenes, this challenged the audience’s perception of society the most, emphasising the assumptions the characters (and audience) had made about the safety of women, with outstanding performances from Browne and Henley.

Ultimately a powerful, heart-wrenching, and sensitive piece performed by two first-rate actors, with wonderfully nuanced direction. It calls attention to the prejudices towards women in today’s society, and shines a light on an often-ignored age in a woman’s life. Highly recommended, and I certainly suggest keeping an eye out for Alice Henley’s next work.

Two friends share dating ‘war’ stories as one gets ready to go on a date. A dark comedic view on the perils of dating in the modern world.
A very honest and autobiographical piece about fertility and the many obstacles that can face a woman in her 30s when she wants to start a family.
A parent frantically worrying about her young daughter who hasn’t returned home. A mixture of humour and drama, the play follows their often irrational and extreme imaginations, ultimately playing out the worst-case scenarios.
Partly inspired by true events, Wonder in Aliceland is a collection of comedy and drama, exploring human relationships and society’s stereotypes.

I have seen some outstanding acting recently at the intimate Finborough Theatre, and this new play is no exception. The highly talented cast quickly … END_OF_DOCUMENT_TOKEN_TO_BE_REPLACED

In the pandemic (remember that?) I worked in adult social care. My role was to help older people in their own homes with daily tasks - I’d cook meals, … END_OF_DOCUMENT_TOKEN_TO_BE_REPLACED

The world-famous Wilton’s Music Hall and the children’s classic The Wind in the Willows make perfect bedfellows. Piers Torday has written a version … END_OF_DOCUMENT_TOKEN_TO_BE_REPLACED

Some journalists get, as it were, a bad press, though some of them don’t help themselves with some of the things they write and do. This play doesn’t, … END_OF_DOCUMENT_TOKEN_TO_BE_REPLACED

Paul (Lewis Bruniges) and Freddie Metz (Oliver Yellop), who identify as cousins, are so desperate to get out of the German Democratic Republic, … END_OF_DOCUMENT_TOKEN_TO_BE_REPLACED