Dear Evan Hansen London West End: “ONE OF THE MOST REMARKABLE SHOWS IN MUSICAL THEATRE HISTORY.” – The Washington Post 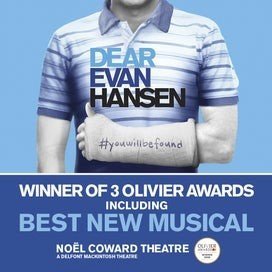 Evan Hansen is about to get the one thing he’s always wanted: a chance to finally fit in.

Striking a compelling chord with audiences and critics all over, DEAR EVAN HANSEN is a six-time Tony Award®-winning musical about life and the way we live it.

The songs, of course, are decent, though it’s worth pointing out this is hardly a song-and-dance production. The standout musical number for me, ‘For Forever’, elements of which are repeated periodically thereafter, sees Hansen envisioning what time spent between “two friends on a perfect day” would be like. If anything, this is a show that reminds its audiences that nobody deserves to be forgotten. May Dear Evan Hansen’s sun shine bright in the West End, and (we can but hope) for forever. It’s emotionally exhausting but wholly rewarding: I’ve already booked to see it again. Dear Evan Hansen Review by Chris Omaweng

Please note: There is a strictly-enforced limit of 6 tickets per person, per booking period.