Agatha Christie’s The Mousetrap – the longest-running show in the world, which has been suspended since the pandemic resulted in the closure of UK theatres in March 2020 – is to re-open in the West End on Monday 17th May 2021. 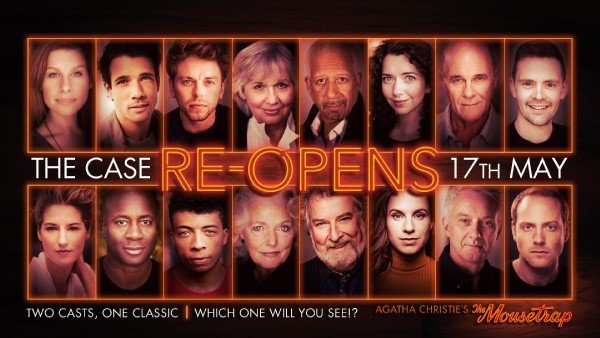 Two sets of casts – comprising Olivier Award winners and highly acclaimed stars of TV and film – will come together for the iconic thriller as it re-opens at the St. Martin’s Theatre on the day that Stage 3 in the Government’s “Road Map” to ease restrictions across society comes in to effect.

The casts are completed by Joshua Griffin, who will be making his West End debut in The Mousetrap, Paul Hilliar (UK Tours of Tabby McTat, Much Ado About Nothing and Richard III), Sarah Moss (theatre includes Noises Off at The Old Vic and The Lion in Winter at Theatre Royal Haymarket), Lizzie Muncey (Beauty and the Beast and Twelfth Night, both at the National Theatre), Tony Timberlake (Chicago, Hairspray, Cats, Les Miserables in the West End), Kate Tydman (Top Girls at the National Theatre and West End productions of Evita, Mary Poppins and Cats) and Alexander Wolfe (BBC’s In the Club).