The Play That Goes Wrong Tickets for the Duchess Theatre

The Cornley Polytechnic Drama Society are putting on a 1920s murder mystery, but as the title suggests, everything that can go wrong… does! 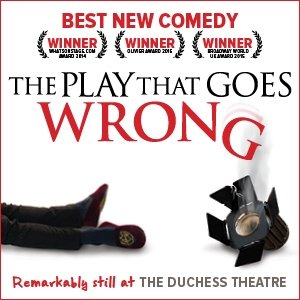 The Cornley Polytechnic Drama Society are putting on a 1920s murder mystery, but as the title suggests, everything that can go wrong… does!

The accident-prone thespians battle against all odds to make it through to their final curtain call, with hilarious consequences! Given five stars by The Daily Mail, called a “gut-busting hit” by The New York Times, and with celebrity endorsements from the likes of Ant and Dec as the “funniest show we’ve seen! If you can get a ticket go”, what are you waiting for?

Now stumbling through its sixth catastrophic year, THE PLAY THAT GOES WRONG is guaranteed to leave you aching with laughter!

The Play That Goes Wrong has already surpassed all expectations since its humble beginnings at The Old Red Lion Theatre, and gone on to win Best Comedy awards from What’s on Stage and The Oliviers. This is one of those plays that drama students will be kicking themselves for not having written, even though there are a zillion versions of this sort of play kicking around fringe theatre, but what Mischief Theatre have done to make theirs special is to absolutely go for it, with full force and all guns blazing – and they’ve pulled it off. Kudos.