Unfortunately, as a result of ongoing social distancing restrictions, ATG have now suspended all performances at their UK venues until Sunday 18 October 2020.

Bookings for performances with confirmed rescheduled dates will be automatically moved to the new dates and customers will be informed accordingly. We are working with Producers to reschedule as many postponed shows as possible so please do bear with us. Full credit vouchers which are valid until 31 December 2021 and including all fees, or refunds, are available for all cancelled shows.

Over the last few months, our teams up and down the country have successfully rescheduled over 15,000 separate performances of great quality plays, musicals, comedy and live music.

Regent’s Park Open Air Theatre have announced that their entire 2020 season has now been postponed to 2021. The 2021 season will open on Saturday 15 May with the new musical, 101 Dalmatians followed by Romeo and Juliet and concluding with Rodgers and Hammerstein’s Carousel. MoreOutdoor events will include Jimmy Carr’s, Terribly Funny, Shakespeare for Every Day of the Year LIVE, Luisa Omielan’s God is a Woman and the Luna Cinema screenings of Pretty Woman and The Shining. During August 2021, the theatre will also host Dragons and Mythical Beasts. 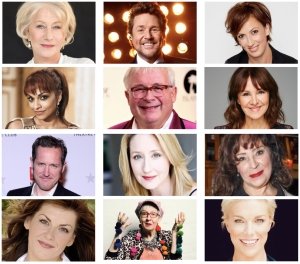 Until The Curtains Rise (www.untilthecurtainsrise.com) is a silent auction with ‘rewards’ donated by West End theatre stars and creatives, to help those in the UK theatre community who need crisis funds as a result of the devastating theatre closures.

Funds raised will be administered by Acting For Others, who provide financial and emotional support to all theatre workers in times of need through their 14 member charities. Equity UK is also supporting the Until The Curtains Rise initiative.

David Pugh and Theatre Royal Bath Productions are delighted to present The Nigel Havers Theatre Company in Noel Coward’s gloriously entertaining PRIVATE LIVES. This will be the inaugural show for The Nigel Havers Theatre Company, which will be touring the country with a wonderful line-up of theatrical gems. The plan is that the UK Tour of PRIVATE LIVES will begin at Theatre Royal Bath on 1 October 2020.

Award-winning theatre producer David Pugh said of the new company, “Nigel Havers is one of the biggest stars who likes to tour and in the past we have had some incredibly successful partnerships, from Art through to Frank McGuinness’s adaption of Rebecca.

“My suggestion last year to Nigel to form The Nigel Havers Theatre Company was met with a wry smile, but he warmed to the idea and finally agreed that he would take 18 weeks out each year to tour a play, ‘as long as the play is entertaining and, most importantly, ticket prices are accessible to as many people as possible.’”

David continued, “Little did we know last year that this now seems to be more important than ever and, when we are allowed again to safely open theatres, we have to realise theatre can no longer be the luxury item it so often is; theatre should be able to be seen by and be for everybody. Ticket pricing and ticketing charges have become ridiculous. I believe our job is simply to entertain and to as many people as possible and now, out of this crisis, let’s hope we can address this and do just that.”

Coward’s dazzling comic masterpiece is both a scintillatingly witty and scathingly vitriolic study of the rich and reckless in love. Elyot and Amanda, who were once married, find themselves in adjoining rooms in the same hotel on the French Riviera, both on honeymoon with their new partners. Their initial horror quickly evaporates and soon they’re sharing cocktails and a romantic serenade.

The Olivier Award-winning Patricia Hodge OBE, one of the country’s most loved actresses, plays Amanda. Nigel Havers, ever suave and thoroughly charming, plays Elyot, the role taken by Noël Coward himself in the original production in 1930. Astonishingly, it is the first time Nigel Havers has appeared in a Coward play on stage.  Dugald Bruce-Lockhart plays Victor and Natalie Walter plays Sibyl.

PRIVATE LIVES will be directed by Christopher Luscombe, with set and costume designs by Simon Higlett, lighting design by Tim Mitchell and casting by Sarah Bird.

In view of the Coronavirus now hitting the arts in the UK, with theatres and venues closing for the foreseeable future, we thought it might be an opportunity to share some digital resources. Theatre isn’t only about performances on a stage, it is about embracing the body and soul – a means to escape from […]

The Play That Goes Wrong, the Olivier Award-winning box office hit, is delighted to announce today that it will return to the Duchess Theatre, its home for the last six years, from 19th November 2020. Producers Kenny Wax and Stage Presence Ltd say, “The Play That Goes Wrong has been a tonic for people’s spirits […]

The cast and full creative team has been announced for Hope Mill Theatre’s hotly-anticipated revival of the classic rock musical RENT, directed by Luke Sheppard. RENT will play at Hope Mill Theatre in Manchester from Friday 30th October to Sunday 6th December 2020. The 12 company members, who were originally cast back in February are […]

The thrilling experience of seeing actors live on stage is under threat during the present Covid restrictions. Theatres have been closed and this new book reminds us of what we are missing. Through the eyes of this legendary photographer, we observe how the performers get ready to astonish their audience. To celebrate the publication of […]

Following a sell-out tour in 2018/19, Dan Looney, Adam Paulden, Jason Haigh-Ellery and Richard Klin for DLAP Entertainment are delighted to announce that the award-winning smash-hit musical “ROCK OF AGES” will return to tour the UK opening at Portsmouth Kings Theatre on 2 May 2021. Tour schedule and on sale details below with further dates […]

Following the success of the first series, In the Wings is returning from Friday 25th September for a second glorious series. IN THE WINGS is a series of human-interest interviews and live entertainment hosted at the Arts Theatre, London with composers, writers and creatives of shows that are postponed due to COVID-19. In the first […]