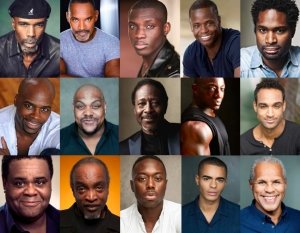 Marking two months since George Floyd’s death during police arrest in Minneapolis USA, and in response to the outrage expressed across the globe, theatre producer Danielle Tarento has brought together more than 150 Black and Black mixed-race actors from the UK and the US, along with a 38-piece orchestra, to record ‘Make Them Hear You,’ from the Broadway musical ‘Ragtime’, to raise money for StopWatch (Stop-Watch.org).

In ‘Ragtime’, set in New York at the turn of the 20th century, African-American Coalhouse Walker Jr. suffers great injustice because of his colour. Fighting back, he sings an inspirational message of hope before surrendering himself to the police, who ultimately shoot and kill him.

George Floyd was killed during an arrest in Minneapolis USA on 25 May 2020, after a white police pofficer knelt on his neck for almost eight minutes. For the last three of those minutes, Floyd was motionless and had no pulse, but officers made no attempt to revive him.

After Floyd’s death, protests were held globally against the use of excessive force by police officers against black suspects and lack of police accountability. Protests began in Minneapolis the day after his death and developed in over 400 cities throughout all 50 US states and internationally, including cities all across the UK.

The StopWatch campaign has been fighting the racist and disproportionate use of stop and search since 2010. Run by lawyers, activists and academics, the group works to promote effective, accountable and fair policing, inform the public about stop and search, develop and share research, organise awareness-raising events and forums and provide legal support challenging stop and search.

Make Them Hear You

Global Creatures, the producer of Moulin Rouge! The Musical, has announced today that the UK premiere of the acclaimed show will begin performances at … END_OF_DOCUMENT_TOKEN_TO_BE_REPLACED

Be More Chill, the mind-bendingly, delightfully fun, hit musical is set to open at The Shaftesbury Theatre for a limited 10 week run from Wednesday 30 … END_OF_DOCUMENT_TOKEN_TO_BE_REPLACED

Producer Stacey Mindich has announced that the London production of Dear Evan Hansen, which won the 2020 Olivier Award for Best Musical, will reopen … END_OF_DOCUMENT_TOKEN_TO_BE_REPLACED