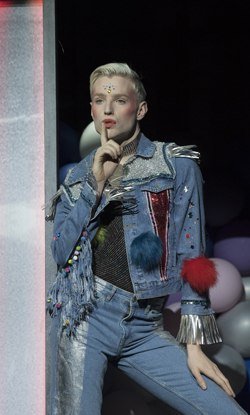 I had, in jest, referred to The 18th Annual Whatsonstage Awards as The Most Assertive Social Media Campaign Awards 2018, a sentiment shared by The Ferryman’s Fra Fee. Picking up the award for Best Supporting Actor in a Play, he mused that if Nathan Lane ran a Twitter account, he’d most likely have won that category instead. As for the musicals, 42nd Street and Everybody’s Talking About Jamie dominated, picking up seven awards between them – in a seemingly ever darker and more uncertain world, the feel-good factor that permeates through both of those productions is a sure-fire winner with audiences.

I should imagine, looking at the categories and the sheer talent represented therein, some of the votes were close runs. It is, as a fellow attendee pointed out, always interesting to see where the public vote goes – and who turns up in person. One of the talking points afterwards was a gaffe over a pre-recorded acceptance speech, in which David Tennant apparently won Best Supporting Actor in a Musical. Trevor Dion Nicholas and Vikki Stone handled the situation well, one of the only moments in which, being unscripted, the ‘presenters’ became ‘hosts’ and enjoyed some proper rapport with the audience. Playing it straight, however, did pay off in minimising banter and concentrating on the awards and the winners themselves.

Two of the musical performances also proved topics of conversation, given their inclusion in a celebration of British theatre – the show opened with a medley of songs from The Greatest Showman, a motion picture whose songs, or at least the ones selected here, don’t work nearly as well in concert format than they do in the cinema. The second half, which only finally got underway after an irritated voiceover announcement implored the audience to re-take their seats as Whatsonstage was unable to “pay the orchestra any extra”, included a wishlist of Broadway shows that would probably do well if they transferred to the West End – Dear Evan Hansen, Waitress and Come From Away. Arguably this was a missed opportunity to showcase some homegrown talent, or at least some upcoming shows already confirmed as coming soon, such as the revival of Chicago at the Phoenix Theatre, or the forthcoming run of Chess at the London Coliseum.

Sonia Friedman received the Equity Award for Services to Theatre, a well-deserved accolade for someone who has produced in excess of 150 shows of various styles. With Harry Potter and the Cursed Child (producer: Sonia Friedman) being all the rage last year, and Hamilton having missed the cut-off point of 24 November 2017 (public performances did not start until 6 December), this year’s awards were widely distributed among many shows. Congratulations to the winners (shown in bold) in the full list below.

Following on from the return of the critically-acclaimed, five-star production of Cyrano de Bergerac, The Jamie Lloyd Company brings Chekhov’s tale of … END_OF_DOCUMENT_TOKEN_TO_BE_REPLACED

THE PHANTOM OF THE OPERA at Her Majesty’s Theatre is delighted to announce that booking is extended to Saturday 4 March 2023, with a new performance … END_OF_DOCUMENT_TOKEN_TO_BE_REPLACED

Producer Runaway Entertainment is delighted to announce that the critically acclaimed, smash hit, supernatural thriller 2:22 - A Ghost Story will … END_OF_DOCUMENT_TOKEN_TO_BE_REPLACED