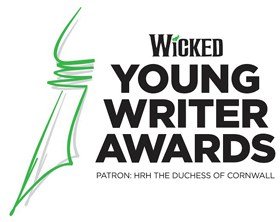 WINNERS OF SIXTH ANNUAL WICKED YOUNG WRITER AWARDS REVEAL YOUNG PEOPLE CONCERNED ABOUT IMPACT THEY HAVE ON THEIR COMMUNITIES AND THE WORLD
•14 year-old excluded from school is winner of 11-14 category
with powerful poem about prison life
•17 year-old from Plymouth inspired by homelessness and poverty she witnesses in hometown
•Award ceremony hosted by Gaby Roslin and presented by Head Judge, Cressida Cowell
•New WICKED: FOR GOOD category winners announced

The 2016 Wicked Young Writer Awards today announced its winners during a ceremony involving over 100 shortlisted finalists and their families and teachers at London’s Apollo Victoria Theatre, home of the multi award-winning musical Wicked.

Now in its 6th year, the Awards encourage young people aged 5-25 years to use writing as a way of expressing themselves, producing unique and original pieces of prose and poetry. This year the standard of entries was higher than ever, revealing young people who are engaged in their communities and the world through their writing. The Awards celebrate originality and the unique voice of the young writer.

Each year, thousands of entries are received across five age categories, with the addition in 2016, of the WICKED: FOR GOOD Award, encouraging 15–25 year olds to write essays or articles that recognise the positive impact that people can have on each other, their communities and the world in general. The new award celebrates the WICKED: FOR GOOD programme, which supports the charitable causes at the heart of the stage musical.

The ceremony was hosted by Gaby Roslin, TV and radio presenter, with prizes presented by Head Judge Cressida Cowell, bestselling author of the How to Train Your Dragon series of books.

Wicked cast members also performed songs from the hit musical, as well as readings of the winning entries, which were revealed as:

8-10 Category:
Joint winner: Angelina Thakrar, 8 from Lewes for ‘The Day of the Dead’
Joint winner: Matilda Collins, 11 from Eastbourne for ‘Night Step’

15-17 Category:
Joint winner: Amber Marino, 15 from Sutton, Surrey for ‘The Journalist’
Joint winner: Charlotte Morgan, 16 from Bridport, Dorset for ‘Desire of the Soul’

Amongst this year’s finalists were stories, poems and non-fiction writing showing the beginnings of real social awareness and conscience. Highlighted concerns included environmental disasters, the rights of women, arranged marriages, the plight of refugees around the world and more immediately, the homeless. A powerful and realistic cautionary tale showed the dangers and difficulties of life in a young offender’s prison. Fantastical ghost stories, wildly funny pet stories and great flights of imagination made the younger entries a joy to read.

Cressida Cowell said of the winners, “This year, my fellow judges and I read poems and stories that are poignant, amusing and captivating. They addressed really big issues, war, homelessness, prejudice, and abuse. There was an incredible range of styles and an array of brilliantly original voices, but they all had this in common: they made us judges feel something. As an author, one of the main messages I want to get across to the young people in this country is that a career in writing or the Arts is an option open to them. Did you know that last year the Creative Industries made £10 million an hour for the UK economy? These young writers whether finalists or winners need to carry on writing.”

Wicked’s Executive Producer Michael McCabe commented: “Created in 2010, with the passionate support of Michael Morpurgo and our Patron HRH The Duchess of Cornwall, these Young Writer Awards were designed to promote literacy in the UK and encourage young people to explore their creativity. Six years later, the many thousands of entries received annually continue to inspire and amaze us all. We remain exceptionally proud that Wicked has provided the platform from which the extraordinary gifts of so many young people have been discovered and celebrated.”

Championed by Patron Her Royal Highness The Duchess of Cornwall and spearheaded by Michael Morpurgo, the judges this year included the bestselling author of How to Train Your Dragon books, Cressida Cowell; Jonathan Douglas, Director of the National Literacy Trust; Michael McCabe, Executive Producer of Wicked; award-winning poet and playwright, Sabrina Mahfouz; and Henry Smith Director of Lend Me Your Literacy.

'Look anyone will tell you, I’m a pretty straight sort of guy.' Tony Blair A reckless reappraisal of the life of former Ugly Rumours front man and … END_OF_DOCUMENT_TOKEN_TO_BE_REPLACED

Michael Harrison and the Really Useful Group are thrilled to announce that The Wizard of Oz, the musical based on the iconic story by L. Frank Baum, … END_OF_DOCUMENT_TOKEN_TO_BE_REPLACED

Following major demand for tickets, the Queen of comedy Dawn French has announced a host of new UK tour dates for her critically acclaimed live … END_OF_DOCUMENT_TOKEN_TO_BE_REPLACED